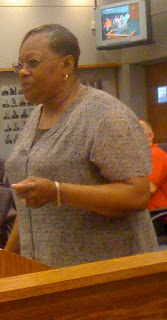 The Planning and Zoning Commission unanimously approved an application to convert the Polish National Home, at the intersection of Warwick and High Streets, into a church. The All People Community Outreach (APCO) ministry will purchase the building for their services and fellowship meetings. APCO has been meeting for 9 years in borrowed space, it currently meets in Bielefield Elementary School.
Attorney Michael Dowley, representing the applicant, told the Commission that since the Polish National Home is a non-conforming use (grandfathered into the neighborhood, it would not be automatically approved today), there was only one question, "Is this [APCO] use less intense than the use as the Polish National Home." He argued that since the Polish National Home hosts parties of up to 250 people, and at one time had as many as 750 members, while APCO has only 25 members, the answer was obvious.
Olga Gorey and Leon Klick, who are members of the religious groups currently using the Polish National Home, said that social clubs are not maintaining membership, "We just can't get young members to join." They argued that the conversion of the social club to a church was a good thing for the community. About 25 members of the public, mostly from the new church, attended the meeting to support the application. 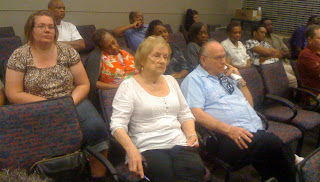 Two residents of the neighborhood raised concerns about parking, and the possibility of a soup kitchen or homeless shelter being opened by the church.
Eunice Raynor, APCO pastor, said that the church was focused almost exclusively on outreach, "We are an outreach ministry. ... We don't plan to spend a lot of time in the building."
Dowley said that the church has a written agreement to be able to use parking at the mini-storage facility on Bretton, and thus has more parking available, for fewer members, than does the Polish National Home.
The Commission included an amendment to the application which restricted the use of the building to those uses included in the application. This requires the church to submit a new application in order to open a soup kitchen or homeless shelter in the building. 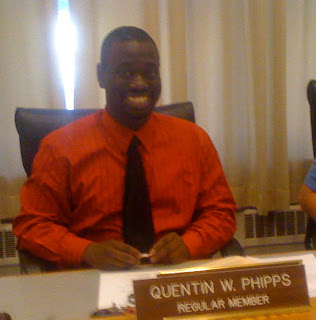 Other Business.
Chair of the Commission Quentin Phipps announced that the City of Middletown had officially dropped the lawsuit it had filed against the Planning and Zoning Commission over its approval of a zoning variance for the Public nightclub on Main Street (The Public went out of business despite P&Z approval).
Phipps invited discussion over the proposed ordinance aimed at making Middletown a more bicycle-friendly community. Planning Director Bill Warner said that a group of bicyclists who meet at Pedal Power to go on long rides had contacted members of the Common Council, and had appeared at the Economic Development Committee. EDC had supported an ordinance which was then discussed by Common Council. Council in turn asked for further review of the ordinance by a variety of commissions including the Ordinance Study Commission and the Public Works Commission.
Warner suggested that Public Works might object because under the ordinance all of their road projects would be subject to the advisory opinion of a committee championing bicycle traffic. He pointed to last summer's repaving of Wadsworth Street as an example where a bicycle committee might have insisted that sidewalks or bicycle lanes be added to allow residents to bike or walk to Wadsworth Park.
The Commissioners heard from Beth Emery, an Eye contributor and longtime advocate of alternative transportation; she said that support for alternative transportation came from more people than just the Pedal Power cyclists. There was cursory discussion about the ordinance, with Phipps cautioning against an ordinance which would aid a very small number of residents. He also said that he hoped that the purview of any bicycling committee would not duplicate the concerns of the P&Z.
Posted by Stephen H. Devoto at 5:01 AM

SAVE THE POLISH NATIONAL HOME

Congrats to the new church. For those who were there and stated this was a bad idea and would hurt property values, shame on you.

Curious when people started to see a church as a negative in their neighborhood.

Zoning exists for several reasons. One is to allow municipal officials to plan orderly development. Another is to ensure a degree of stability for businesses, homeowners, and institutions, so that they are willing to invest their money in the area. This is precisely why different neighborhoods have different zones. “Disgusted citizen”, in criticizing those who care about property values, is actually criticizing an important raison d’etre of zoning. I would refer “disgusted citizen” to section 10 of Middletown’s Planning and Zoning Code, Section 10, General Provisions – especially paragraph 10.02, “Intent”.

The context of the present situation is important: A congregation of only 20-30 members (after nine years in Middletown) is planning to purchase a large complex of buildings that had at one time served hundreds of Polish National Home members. That complex will require significant ongoing maintenance in the coming years. My concern, in part, is that the small congregation will not be able to maintain the structures in good repair. In addition, this can hardly be considered an appropriate use for the building, as it will be largely underutilized. It is therefore appropriate for neighbors and officials to be concerned about, and to ask about, the intentions of the congregation in their selection of such a location. And it is precisely for this reason that the Commission felt it appropriate to amend the motion to include language potentially prohibiting any future proposal to run a soup kitchen or shelter.

Another point of discussion at the hearing had nothing to do with the buyer as such, but was rather directed at the City’s historic failure to maintain its tree lawns and keep them free of asphalt and parked cars. The removal of the curb cuts and tree-lawn asphalt in front of the Polish Home should be made a condition of the sale of the property, regardless of the buyer. The incremental paving of the tree lawns in this area of town does indeed hurt property values and degrade the neighborhood. Thus it is a great pity that language for their removal was not included in the motion. This constitutes another lost opportunity for the city.

Finally, just because an applicant is a religious group does not mean it should be treated any differently than any other applicant. Too often poor decisions are made in Middletown because officials want, whenever possible, to hop on the “feel good” bandwagon. And when they do so they abdicate their civic responsibilities and fail to live up to the office to which they were elected.

From, wikipedia:Theoretically, the primary purpose of zoning is to segregate uses that are thought to be incompatible. In practice, zoning is used to prevent new development from interfering with existing residents or businesses and to preserve the "character" of a community.