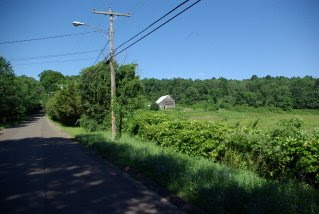 The Middlesex Land Trust has purchased 53.8 acres of land on Boardman Lane to protect as open space, for $1.4M. The purchase used funds provided by the Army, ultimately through the Base Relocation and Closure Act. The Land Trust will be stewards of this land, which the Army Corps of Engineers set aside as mitigation for the loss of wetlands due to the construction of the Armed Forces Reserve Center being built at the site of the former Cucia Park.

“This joint project will provide for the permanent protection of sensitive upland and wetland habitats in the Sawmill Brook watershed, as well as provide public access to a beautiful open landscape. It’s a great result for the community of Middletown, the watershed, the Land Trust and the Army,” said Land Trust Managing Director, David Brown.

The Middlesex Land Trust is a non-profit agency dedicated to preserving land as open space. They currently own and manage over 800 acres in northern Middlesex County, including now about 250 acres in Middletown.

The acquisition was through the Army Compatible Use Buffer program, which allows the Army to prevent commercial development too near its facilities. Diane McCartin, the project manager for the Army base, said, “The purpose of the program is to allow the army to partner with a private non-profit to prevent commercial encroachment [around military facilities].” She said the program provides a security benefit to military installations, and also protects environmentally sensitive lands.

McCartin said that the Boardman Lane mitigation site was perfect under the program, “Ecologically, it’s connected to Sawmill Brook, the tributary that also feeds the Middletown AFRC site. There are wetlands on the site that have been degraded by animals grazing on them, and there are plenty of opportunities for controlling invasive species, planting native species to enhance the water quality, and preserving and protecting it as open space in perpetuity.” 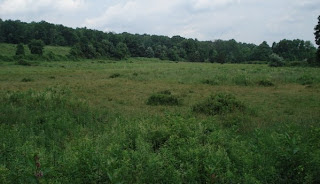 McCartin and Brown both said that the acquisition by the Land Trust was challenging, primarily because Congress has restricted the ways in which the Army is able to purchase and transfer land. Brown praised McCartin’s efforts to enable them to use the Compatible Use Buffer program, “I have never worked with anybody more competent than Diane.”

This is the first time that the Army Reserve has ever used the Buffer program for one of their facilities.

There is a permanent conservation easement on the land, preventing any future development. Moreover, the purchase includes a cooperative agreement which will allow the Army to enter the land to carry out the mitigation efforts required under their wetlands permit. Those mitigation efforts include the removal of invasive species, a careful mowing schedule, and the planting of native trees and shrubs.

Brown said that after 5 years of the mandated mitigation, the land will be fully accessible to the public. He said that there will be no livestock grazing.

The Boardman Lane property is real pretty. There is a property, it would cost $0.00, that has a lake, a developed rail trail, is abutting the Mattabassett River, and within walking distance of the highest density of residents in the city. These residents are also major tax payers, maintain their own fire department, and have prescious little regular police protection. The Army took the only park in their area. Why would the Land Trust not take the abandoned West Lake property and upgrade it for public use? It is also a wetlands property and the adjacent land had, at one time, been GIVEN to Target for development. They turned it back to the city when they chose not to use it. Why isn't this land taken and used for the public good as well?

I am sending in my membership dues right away. I want to be part of this great organization.

Thank you for your observation. The property you mention sound like a good candidate for public use and perhaps should be investigated and considered as such.

Can you please specify exactly where this other property is? (street boundaries or other specific landmarks)? It would help us visualize the exact area (for those of us who are not familiar with the Target deal).

In response to Anonymous: Perhaps it had something to do with a political power-play acted out by the owners of the Boardman Lane Property who where mighty upset that they where not going to be able to sell their un-developable land to the Army after all.

All said and done, the out of state developers who owned the Boardman Lane property as a speculative land development project, got what they wanted without a court case, they got their payday and never lost a dime on the investment.

All behind closed doors. Expediency with no public input and better yet know knowledge! No implication to the Land Trust implied here, it's the other players, who set out the deck of cards as a winning hand.

Middletown loses more property from the tax roles. With Aetna gone and taxes climbing this make so much sense....

I am all for open space but, we need to add revenue to our tax roles. This will not help.

The property noted is bounded on the north by the Mattabassett River, the south by Westlake Drive, the east by Newfield Street, and the west by I91. There are three major areas, two abutting I-9( one marsh south of condos and one field and trees west and north of condos to the old rail bridge. The other area sits south and east on the new rail trail and has a lake and small island, overgrown b'ball and tennis courts, and a small dam. As for the details on the Target deal, you may want to talk to our planning guru, he seems to know alot about that.