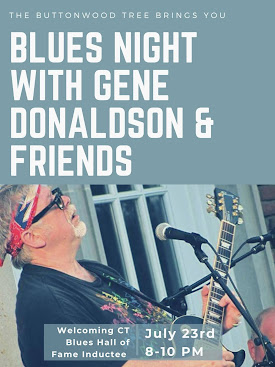 Join us at The Buttonwood Tree for a memorable performance featuring Blues Hall of Fame inductee, Gene Donaldson, and drummer Stephen Krzynowek.
Gene has starred in “The Motown Review ” 1985 thru 1992, Phil Guy Band, Lee “Shot” William’s, Mary Taylor, his own group “The Stingrays” , “The Redliners”, and “The Instigators “ In 2019 Gene was recognized as a “Master Blues Artist” and inducted into the Connecticut Blues Hall of Fame. He is still performing on a regular basis, averaging over 100 gigs a year since 1985.
A friend of Gene, Stephen Krzynowek is a drummer from New Hartford, CT. Aged 29 years with 13 years of drumming experience, he enjoys the soul and dynamic range of blues music, and is a recent addition to the Brass Horse Cafe house band.
$10 in advance, $12 day of show. Book your tickets HERE!
Posted by The Buttonwood Tree at 1:05 PM