Mayor Dan Drew will address the opportunity for a Washington Street development at a press conference this afternoon at 4PM, in Council Chambers. He will be joined by Bob Landino, of Centerplan Companies, which is developing a plan for land between Pearl and High Street.

Landino told The Eye that the planning for the development is in its very early stages. He said it is unusual to have a public announcement this early, even before an artist's rendition has been done, but that the extensive discussion "on the blogs" led the mayor to call a press conference. The discussion started Friday, when Wesleyan announced that it was considering moving its bookstore to Centerplan's possible development.

Landino said that Centerplan was in negotiations with national brand retailers about leasing space in a possible development. He confirmed that these included Chipotle and Starbucks, "We are very confident about those two."

He also said that Wesleyan had signed a term sheet for moving its bookstore from Broad Street to this possible development, "We've agreed to terms." The term sheet is a document that helps Landino apply for financing, and makes the leases more attractive to national chains. It does not commit Wesleyan to moving the bookstore. 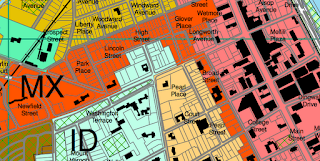 Current zoning regulations on the 4 lots under consideration would not allow retail establishments that generate a lot of traffic. Three are zoned ID, which allows institutional and educational establishments. Unless Wesleyan was able to claim that these businesses were part of its institution, the development would not be allowed. The fourth lot is zoned MX, which allows residential and some low-traffic businesses by special exception.

Developers can apply to have property rezoned, for example, Centerplan could argue that this area should be zoned B-2, similar to the part of Washington Street that includes the Walgreens and Dunkin Donuts. The Planning and Zoning Commissioners recently approved a similar zoning change on Washington Street near Old Mill Road.

If Centerplan submitted such a proposal, an important question for Middletown would be the extent of the rezoning, would the rezoning be solely for one block, or could it extend from Main Street to Newfield? Landino said that his company had not yet done any zoning analysis.
Posted by Stephen H. Devoto at 11:32 AM

Email ThisBlogThis!Share to TwitterShare to FacebookShare to Pinterest
Labels: stripmall

Do we really need another commercial building? We have several empty storefronts downtown on Main St. - I'd rather see those moved into first. They should have plenty of room for a Starbucks, Chipotle's, etc.

Just what Middletown needs, lousy coffee and faux Mexican food. Do we really want to all of Washington St. to look like it does west of Palmer Field?