Jen Alexander's post generated a lot of interest about the possibility of a mini-mall on Washington Street. It also generated a lot of comments (17 and counting), some of which included statements that are either premature or incorrect. This post is an attempt to clarify what is publicly known about the proposal, and to describe the approval and public input processes for developments in our city.

The development is being proposed by a prominent city developer, Bob Landino. Landino's Centerplan Companies developed the Landmark Square building, which houses the Rite Aid Pharmacy near the south end of Main Street, and the dialysis center on Main Street. Landino is also the owner of Greenskies, which recently entered into a contract with the City to install solar panels on City property and sell the resulting electricity to the City.

According to Wesleyan's public blog about the Washington Street project, "Centerplan Companies ... approached Wesleyan more than a month ago regarding their plans to build a bookstore on Washington Street." According to the blog, "[Centerplan] indicated that they were finalizing leases with two additional tenants that are popular with college communities." This is consistent with reports that Chipotle and Starbucks are in discussions with Centerplan. 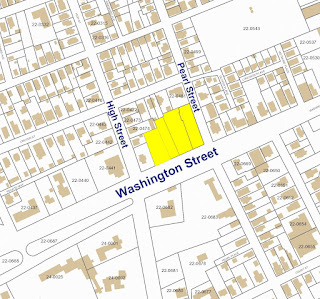 The proposed development would be on the north side of Washington Street, between Pearl and High. Five lots span this block, one is owned by Wesleyan, the others are privately owned. Centerplan has contracts to purchase four of these lots, including the Wesleyan-owned one, according to Joyce Topshe, Associate Vice President for Facilities.

Based on the available information, it is likely that Centerplan has already invested considerable effort towards making this development a reality.

Developers typically start with an initial sketch or concept plan. In its later stages, this would include an artistic rendition of the development, and a calculation of costs and potential revenues. During this process, the developer would negotiate the right to purchase the necessary land, and they may line up tenants for the future building. The developer would likely have discussions with the City Planning Office, and frequently other important people in city hall, including the Mayor and influential Councilmen. Some developers also choose to discuss their concepts with neighbors, especially if there is an active neighborhood association, in order to at least gauge support and opposition before proceeding with more costly plans. Developers of commercial projects usually try to gain the support of the Chamber of Commerce, and if it might impact downtown, the Downtown Business District.

If the developer is comfortable with the concept plan and the informal reaction from City Hall is positive, their next step is the creation of a well-developed site plan and design. These are quite expensive, requiring not only architects, but also surveyors, designers, landscapers, engineers, traffic studies, etc. Once these plans are finished, they are formally submitted to the office of Planning, Conservation, and Economic Development for review by the relevant city departments, including Fire, Police, Public Works, and Water and Sewer. The proposal is then considered by the Planning and Zoning Commission, an elected city body. Any significant development requires a public hearing at P&Z, at which residents can comment on the plans. After the public hearing, P&Z will consider the plans, city department comments, and public hearing comments before voting to approve or deny the application.

The final stage of a development would be the preparation of construction documents, which translate the design into bricks and mortar.

Meaningful community input can be given at several stages. During the initial phase, when the developer is having informal discussions with City Hall, letters and phone calls from residents can influence whether the Mayor's office and the City Council members encourage the developer. Responsible developers will also be attuned to feedback from city residents, especially ones who live in the neighborhood of the proposal. In this case, Centerplan has encouraged Wesleyan feedback, Nathan Peters, Associate Vice-President for Finance wrote on the Wesleyan blog, "During this planning phase of the development, CENTERPLAN is inviting the Wesleyan community to comment on the proposal."

After the site plan and design are completed, residents can scrutinize these plans at City Hall, and then submit written and/or oral comments to the Planning and Zoning Commission on any its features.
--------------
Relationship clarification: I am a professor at Wesleyan and terrified of crossing Washington Street. I love old houses, Chipotle's, Klekolo Coffee, and Fusion Bakery.
Posted by Stephen H. Devoto at 6:42 PM

I am very concerned about traffic. It's already very congested there!

It seems like the bookstore sited there would be a bad deal for Wesleyan students, and with even more traffic to navigate around. It's the busiest and most congested section of Washington Street, with frequent major back-ups.

I shudder at the thought of Wesleyan students regularly crossing Washington St. If the developer really wants to do this he should consider building a bridge across the street.

The villagers will fight this- but will they fight the disgusting modular building Drew wants to stuff the Veteran's Museum into at Vet's Park or the fecal dog park he has planned at Vet's Park too since it is not in their own backyards?
Will they stand up for others too? Will this comment get published?
Food for thought-

I remember Wesleyan University expansion program in the 60s and 70s. They bought land and houses on Route 17. They extended into and created Wesleyan Hills.
Are we beginning to see another major expansion?

We're very concerned about the affects on traffic. Students crossing Washington street will cause longer light cycles at High Street and maybe Pearl. Cars traveling east on Washington will have to turn left either into a driveway on Washington or onto Pearl if the driveway is located there. That will back up traffic on Washington even more that it already is unless the street is widened to accommodate a left turn lane. More cars coming out of Pearl will make that light cycle longer and will create issues trying to turn left onto Washington. And in the winter, cars traveling east on Washington will have to stop on a slippery hill to make the left turn.

All in all, a poor location for a traffic generating commercial business.

I'm not a "villager," but the people I think you are referring to have nothing to lose from this proposed development. It wouldn't afffect the value of their houses, be in their sightline, or make traffic any worse for them than it would be for anybody else.

If you'd like to start a discussion about the Veteran's Museum & dog park, why not do that? I'd be interested. I haven't seen anything about it. I hope you will do that, and not anonymously, because writing anonymously affects your credibility.

agree in reply to anon1159am - if you want to have a discussion about plans for Vet's Park / museum / dog park, please start a separate discussion. Send an opinion letter or a factual article into middletowneye@gmail.com and we will post it. I am not sure what you are trying to accomplish with your comment. You seem to be lumping "villagers" (whoever that means) into some category of people that you seem to think will pick and choose their battles. Why make assumptions, why not find out exactly for sure by being direct? So what are the issues with the plans at vets? I'd really be happy to see you raise the issues in an informative article.

PLEASE do not commercialize that gateway of our city...look at the south side of Washington street. Russell House...St. Sebastian Church....so beautiful.
on the corner of High and Washington, a magnificent building (Flood Law)
this has disaster writtten all over it...I do not need to see plans to envision how horrible it will be...

I grew up on Newfield Street, and remember when it was mostly residential. The dealerships started moving in starting with Town & Country Auto, and it became the dealership ally way. Now some of those dealerships are no longer in business, and there are gaping, ugly holes. I just don't want to see that happen on the Pearl - High Street section. It might be great in the short term, but what happens when those chain stores no longer find it profitible? Is that section of Washington Street going to be left with an empty building? I just don't want to see another Newfield Street. Let's not forget about the Krispy Creme in Newington. They thought that was a good idea as well, lot of hype, and it was closed about a year later. Residents of Middletown I think we need to really think this through. Do we want to destroy the history and beauty of that section of Washington Street. I for one do not. I drive by there every day, coming into downtown and love it just the way it is.

Just to be clear, Elizabeth, I live in the Village District, on Pearl Street. I will be able to see the development from my front porch. I'm guessing it will have a direct negative effect on the value of my property. In that regard, I have something to lose. But the argument is much larger than my personal loss.