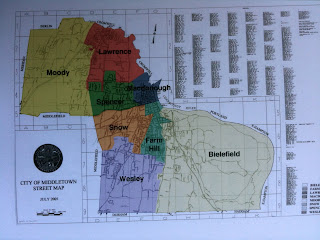 The conclusions drawn by a year-long study by JCJ Architecture of Middletown Schools are to review district alignments, and adjust elementary school districts, and to create a new approach to the ongoing use of Mcdonough School in the city's North End.

The results of the report while significant, and based on an extensive study, are not binding and are subject to alteration and approval by the Board of Education. The board meets tonight to accept the report from JCJ Architecture, at the Middletown High School Media Center, 7:00 PM.

According to the conclusions drawn in the lengthy report:

The elementary school attendance boundaries should be reviewed regardless of any other options which may be pursued. The disparity in enrollment, relative to capacity, can be addressed through this approach; however, doing just this will not address the issue of socioeconomic diversity that has plagued the District. There are three primary options: close the Macdonough School and dispense the students from those neighborhoods to the remaining schools, expand the Macdonough School to bring its capacity more in line with the other elementary schools, or create a curriculum that encourages students to travel out of their community school to attend a school located in vicinity (sic) of the North End neighborhood.

The report suggests nineteen realignments for redistricting of elementary school "catchment areas" (neighborhoods from which students are drawn for schools), and the location of preschool services at a single location, with Snow school suggested as that site.

The new elementary districts would provide for less travel, specifically bus travel, for students, more ability for students to walk to neighborhood schools and maintain a required racial and socioeconomic balance in schools. The realignment would also address overcapacity issues at elementary schools North of Route 66 (Lawrence, Macdonough, Moody, Spencer), and under capacity at schools South of Route 66 (Bielefield, Farm Hill, Snow, Wesley).

The report calls the current configuration of school districts and associated bus routes "convoluted" because they were drawn up as neighborhood development occured around Middletown. The current bus fleet of 60 buses, and 27 vans run approximately 425 routes a day, consuming 200,000 gallons of fuel annually.

The suggested realignment is as follows:

2. 10 students currently at Spencer would attend Lawrence from Town Ridge who are currently bused a significant distance to Spencer.

4. 66 students currently at Mcdonough would attend Spencer from Stonycrest and Rose Circle. This is an isolated neighborhood closer to Spencer than Macdonough.

5. 79 students currently at Moody would attend Mcdonough from Ferry, Grand, Rapallo, Portland, Bridge, Miller Hartford. These students live within walking distance of Macdonough but are currently bused to Moody.

6. 2 students currently at Spencer would attend Mcdonough from Wetmore Place which is in walking distance of Macdonough.

7. 25 students currently at Spencer would attend Farm Hill from Traverse Square. Here an isolated pocket between two schools is bused to a third.

8. 9 students currently at Lawrence would attend Bielfield from Omo and Walnut. This neighborhood is currently split into four different schools.

9. 1 student currently at Lawrence would attend Farm Hill from Maple Street. This neighborhood is split into four different schools.

10. 3 students currently at Wesley would attend Farm Hill from Main Street. This neighborhood is currently split into four different schools.

12. (tbd number of) students from Mcdonough would attend Spencer and Snow from Washington, Bernie O'Rourke, Jackson, establishing Route 6A as a border between Spencer and Snow while improving continuity of bus circulation.

15. 18 students currently at Wesley would attend Snow from Santangelo to improve the continuity of neighborhoods and reduce bus travel.

16. 3 students currently at Snow would attend Wesley from Randolf Road to improve the continuity of neighborhoods and reduce bus travel.

18. 23 students currently at Farm Hill would attend Wesley (as printed in the report - though it appears as Bielfield may be the target school according to maps provided in the report) from Millbrook and Lake Ridge establishing East Main and Millbrook as a perimeter for Bielfield improving continuity and reducing overlapping bus traffic.

In the report, JCJ Architecture encourages a long term solution of establishing "standard building spaces" in elementary schools that would be "requistite for elementary grade curriculum."

The study was originally designed to address these issues:

Email ThisBlogThis!Share to TwitterShare to FacebookShare to Pinterest
Labels: board or education, JCJ Architecture

Thank you so much for all the work you have done to inform the citizens of Middletown of what is going on in the city.

This is great. You take time out to inform us. I appreciate it.