From 1909: Taft at Wesleyan; Shanklin Installed

The following article is from 100 years ago today, published in the New York Times on November 13th, 1909.
William Howard Taft had been elected president in a close contest one year earlier, and fulfilling a promise, spent most of November 12th in Middletown. This was a momentous occasion for Middletown, as evidenced in numerous articles in the Courant (and presumably in the Middletown newspaper). I've chosen the New York Times account of the visit because of its delightful details on the reaction of the Historical Society to his use of General Washington's chair (Taft was about 300 pounds in the fall of 1909). The Times also quotes extensively from Taft's speech at the College, which is as relevant today as it was then.
Taft, despite numerous health problems related to his weight, traveled extensively; the month before coming to Middletown, he hiked with John Muir from Glacier Point to the floor of Yosemite valley (4 miles, 3242-foot descent).
The image shows the Union Street residence of Frank B. Weeks, the Connecticut governor and Middletown resident. This picture was taken on November 12, 1909. The house is no longer standing. 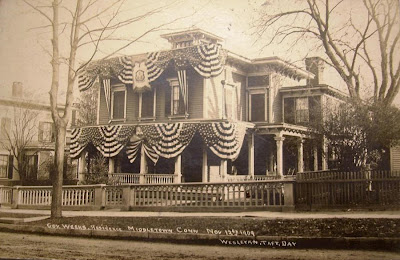 President Takes Part in Inauguration of New Head of the College.
----
Gives Praise to Teacher
----
Then Goes to Hartford, Where He Speaks at Dedication of State Arsenal and Attends a Ball
William H. Taft, the first President of the United States to visit this town since 1832, when Andrew Jackson spent a few hours here, was the guest of Middletown to-day. Late in the day he went to Hartford, whence he started to-night for Washington.
With the President were vice President Sherman and United States Senator Root, who were college mates at Hamilton College of Dr. William Arnold Shanklin, who was installed as President of Wesleyan to-day. About seventy-five college Presidents and representatives from institutions of learning in this country attended the exercises.
A little more than a year ago Mr. Taft, who was then a candidate for the Presidency, addressed a mass meeting in Minneapolis on "Missions in the Orient," and Dr. Shanklin presided. President Taft was so pleased with the young educator that he invited him to take a trip on his private car. When Dr. Shanklin was elected to the Presidency of Wesleyan later on President Taft sent him congratulations and promised to come to help install him if possible.
In the line of march there were fully 5,000 persons. The military consisted of the Second Regiment of the State Militia and two companies of the Governor's Foot Guard, one of the oldest military organizations in this country. They acted as escort to Gov. Frank B. Weeks and his staff. Many fraternal orders had men in line, and there were some floats.
The installation exercises were held in the Middlesex Theatre. As President Taft neared the stage the Wesleyan undergraduates gave the long college yell, with a "Taft! Taft! Taft!" on the end. 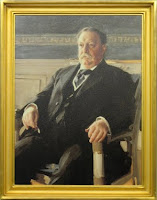 There had been loaned for the occasion by the Middlesex County Historical Society a large, old-fashioned armchair which George Washington sat in when he visited this city when he was Commander-in-Chief of the Continental Army. The chair was made of tough timbers, and as it is still strong it was loaned for the occasion that President Taft might sit in it, though not without some misgivings on the part of the Historical Society, when its members thought of the President's weight. The chair held, however, with never a creak or a groan.
In the afternoon, in Fayerweather Gymnasium, the delegates from other colleges were presented to President Taft and President Shanklin. President Taft also visited the clubhouse of the Wesleyan Chapter of Psi Upsilon, of which fraternity he is a member. About 4:30 P.M. there was a second parade, and the President was escorted to the depot, where he left for Hartford to attend the dedication of the new State Armory.

President Taft in his address paid a tribute to the teacher as the college President and decried the idea that the proper man to head an institution of learning was one who "knew the value of a dollar and how to get it."

It has fallen to me at times to have a share in selecting a college President, and there has always been at such times the suggestion that what we need was a business man, a man who knew the value of a dollar and how to get it--a man who would put the institution on a business basis.

I am glad to say that I always dissented from such an ideal. I am not attacking business men, but I believe that such men have their limitations and that these limitations are such as to exclude them as college Presidents. The college President, first of all, is a teacher. That is his profession, and the university is a teaching institution. If he is to do his duty by the institution he must understand how teaching should be done. He must be a pedagogue.

I congratulate Wesleyan upon having chosen as President a man who in every way fills the measure that I have applied.

We sometimes hear complaints that the old days of plain living and high thinking are gone, that wealth has overthrown our college democracy, that multiplicity of studies has undermined our curriculum, that athletic and social interests have usurped the place in the mind of the student which rightfully belongs to intellectual pursuits. You have seen enough of American student life to know that these complaints have scant foundation; that in its essence the American college of 1910 is no less democratic and far more intellectual than the American college of 1880 or 1850.

Honorary degrees were conferred upon a number of men, among them President Taft, Senator Root, Vice President Sherman, the Rev. George William Knox, Union Thelogical [sic] Seminary; Prof. Ashley Horace Thorndike, Columbia University, and President Faunce of Brown University.
President Shanklin is a native of Carollton, Mo., where he was born on April 18, 1864. He was
graduated from Hamilton College in 1883, and from the Garrett Biblical Institute at Evanston, Ind., in 1891. Dr. Shanklin was ordained in the Methodist Episcopal Ministry in 1889, and held pastorates in Kansas, Washington, and Iowa. He was made President of the Upper Iowa University in 1905. He is a member of the National Geographic Society. He received the degree of A.M. from Hamilton College in 1895, and the degree of Doctor of Divinity from Washington University in the same year. Baker University honored him with the degree of LL. D. in 1906.
------------- 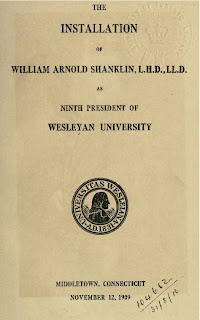 The Installation of President William Arnold Shanklin has the full text of all the speeches, as well as copies of the menus, invitations, and everything else associated with the Wesleyan events of that day.
Posted by Stephen H. Devoto at 5:00 AM

Email ThisBlogThis!Share to TwitterShare to FacebookShare to Pinterest
Labels: this date in history, william howard taft

I happen to be Dr. William Arnold Shanklin's great nephew - his son of the same name was married to my aunt Charlotte Niese.

I have just read Shanklin's own inaugural address and parts of it are timely as I write: August 9, 2018: Dr. Shanklin said, quoted on p. 52 of the inaugural book which I was fortunate enough to purchase some years ago:

The most enthusiastic patriotism cannot shut its eyes to the fact that our institutions are still on trial. They have not passed beyond the experimental stage. The problems of republican government are not yet solved. We are the first successful republic, and we have not yet succeeded. The problems of constitutional liberty must be solved in our colleges and universities, which must instill a deeper discipline, a higher manhood, and a more intelligent patriotism than we have at presen