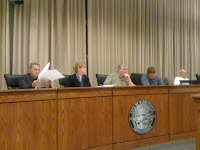 The Planning and Zoning Commission spent most of their Wednesday meeting on transportation issues relating to the Plan of Conservation and Development (POCD). Director of Planning Bill Warner, and Commissioner Catherine Johnson took turns leading the discussion, which ranged from the regional to the very local.
"How do we get connected to the rest of the world?"
That was the first question posed by Warner. He said there was a real possibility, in the long run, of developing rail connections from Middletown to connect with train service to Boston and New York. He pointed to movement in the state and federal governments to extend commuter rail from New Haven through Hartford to Springfield and urged commissioners to consider how Middletown could position itself to connect to that line, at stations in Meriden or Berlin, when there is an increase in rail service. 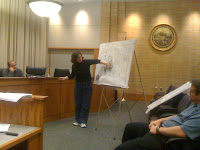 The other rail possibility which Warner brought up would revive the light rail from Middletown through Cromwell, Wethersfield and up to Hartford. The railway rights of way are largely intact, according to Warner, and he said of a train between Middletown and Hartford, "that's an economic development magnet." 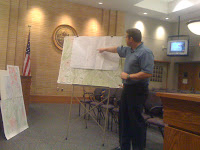 Warner told the commissioners that including plans for rail in the POCD would be the first in a long series of steps necessary to move forward. Commissioners were receptive to developing rail, but also wanted to see less ambitious and expensive transportation alternatives considered. Commissioner Carl Bolz suggested that a dedicated bus with pre-set stops could serve as a stepping stone for the later development of trains.
Sidewalks and Bicycles
Warner told the commissioners that if the POCD includes a plan for which streets should have sidewalks, it would be a relatively trivial matter to include a very small extra sum of money in street paving bonds to add sidewalks to those streets. He gave a few examples of streets where a short stretch of new sidewalks would connect two isolated neighborhoods each with sidewalks.
Warner also presented a map with what he termed "bike sheds, with drainage into downtown." He said the addition of short bike paths in each of these areas could allow 80% of the city's residents to bicycle downtown.
Johnson also proposed new bike routes, but hers were targeted not at bringing bicyclists to the downtown, but rather at fostering bicycling to schools, parks, and grocery stores. She showed a map (reproduced at the bottom) of a route which uses smaller streets and occasional short new paths to create a loop. This loop of bicycle-friendly streets and paths would allow easy bicycle travel between Middlesex Community College, Xavier High, Mercy and Vinal High, and Middletown High, as well as Stop and Shop, Waldbaums, and Veterans, Chrystal Lake and Wadsworth Parks.
Other Business
During the public comment period, Attorney Ralph Wilson, who sometimes represents clients before the Commission, expressed his heartfelt thanks to the Commissioners for their part in his effort to get compensation for damage to his house on Bow Lane. The damage was caused by blasting associated with nearby construction. Wilson indicated that three lawyers observed the commissioners during their visit to his house, and that he received a settlement shortly thereafter.
The Commissioners scheduled for October 28 a public hearing on a proposal to operate a dialysis center at 100 Main Street, the site where Pelton Drugs was. 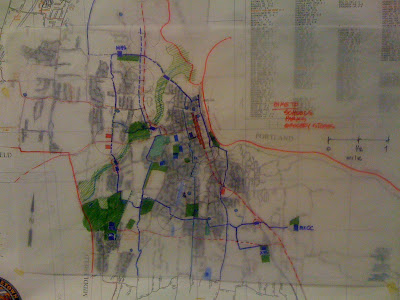 I hear the PZ is having a meeting to approve putting a dialysis center on Main Street right at the old Peltons site. I cant think of a worse use for Main Street. Ambulances in and out all day, and a use which is totally opposite from what the city says they want, more retail. That is a great spot for retail. This meeting will really show us what matters to PZ the long term good of the town or what the Chamber tells them to do. Unfortunatly I bet the Chamber wins.

If you care about your downtown, come out and oppose this.

A prominent corner on Main Street is not the best place for a dialysis center, a methadone clinic or a homeless shelter. Just like a successful retail business the three most important criteria for these users are location, location, location. Please, P&Z, do your job!

you would never see such a use in a mall, Middletown downtown should have the same standards

Could there be anything more odious than four attorneys and the PZ commissioners in one room? Incredibly, many honest Bow Lane home owners avoided this fate, perhaps because their smaller castles were blessedly spared blasting damages. Or maybe their legal pedigrees were correspondingly modest? Looking out for Number One can be a strength in an attorney, that's for sure. Clever attorneys can be great neighbors!

This latest proposed P & Z zoning exception for the Pelton's building is the wrong thing for Main St.. It is why the Plan of Development precludes this use...a lot of traffic, staff parking needs and little retail benefit. Sounds like Middletown will ok this.