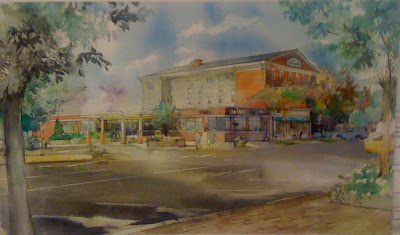 The empty building on the corner of Main and Williams Streets, which formerly housed Pelton Drugs, will soon house a dialysis center for patients with kidney disease. The Planning and Zoning Commission approved a special exception for this use at their meeting on Wednesday evening. The developer plans to use about 15% of the space for retail, 15% for office space, and the remainder for patient treatment.
Da Vita Dialysis
The Da Vita Corporation, which purchased the successful dialysis center in Riverview Plaza, decided that they wanted to operate in a larger space on Main Street. They turned to BL Companies, which built the Rite Aid Building on the other end of the same Main Street block as the Peltons building. When Rite Aid moved from the Pelton's store into this new building, it left the former Pelton's store empty. With the approval of the dialysis center, BL will purchase the building from the current owners, and then lease the building to Da Vita. Ralph Wilson represented the owner, in the application to use the building as a dialysis center.

Bob Landino, president of BL, talked about his company's
previous efforts to rent the empty Pelton's building, "It's very difficult to find tenants who would choose a large size building on Main Street versus one on Washington Street." He said even small retail spaces on Main Street were difficult to rent, pointing to one in their own Rite Aid Building, which has not yet been rented.
Landino said that after the Da Vita Corporation turned to them to develop the Pelton's building, they presented a design to the Planning Department with no retail space at all. After discussions with City Planner Bill Warner, they compromised and designed 2,000 square feet of the 14,000 square feet building as retail space. Landino said he was not optimistic that they would be able to rent even those smaller spaces, "We aren't counting on this retail to pay the mortgage."
The vice president of Da Vita explained that the corporation has 1600 dialysis centers nationwide, with 32 divisional offices. He said Da Vita would like to move the divisional office from Avon to the new center on Main Street because it is central, and provides easy walking to restaurants and other shopping on Main Street. He said the average spending by the corporation on public relations, meetings, and entertainment in cities with divisional offices is about $450,000 per year. The Inn at Middletown, the immediate neighbor of the dialysis center, will get business from Da Vita, and Wilson presented the commissioners a letter of support for the dialysis center from the manager of The Inn.
Public Comments and a Decision
Larry McHugh, president of the Chamber of Commerce, gave his strong support for the dialysis center. He spoke to the importance of having this medical care available in Middletown, "It's a quality of life issue." He also praised Da Vita for their size, and marveled over their desire to move to our city, "It's a Fortune 500 company that wants to relocate their headquarters from Avon to Middletown. From Avon to Middletown!" He also praised the work of BL Companies, calling their Rite Aid Drive-through pharmacy building "a home run."
Jennifer Alexander, who has worked for many years to vitalize downtown, spoke out against giving an exception to allow non-retail use of a Main Street building. She said that if an exception were granted because this developer was unable to find a tenant, other property owners might also look for exceptions allowing them to turn their Main Street retail space into offices. She also questioned why other properties, away from Main Street, were not being considered by Da Vita:

What benefit does this project bring to the property values of our Main Street, to the viability of our downtown district? It's simply not true that there is no other place that would make a suitable home for this tenant. The main benefit is to the developer, and that's not a good enough reason for a special exception.

Commissioner Catherine Johnson expressed concerns that the loss of retail space would create a 'gap' in the block, reducing the mutualism between retail and natural pedestrian flow. Other commissioners were more enthusiastic, and the special exception was approved by a vote of 6-1.

Commissioners Impervious to Walgreens' Request
The Walgreens Drive-through pharmacy on Main Street Extension, currently under construction, requested a change in the conditions under which they received approval. Through the CPH Engineering firm, represented by Herbert May, they asked to be relieved of the requirement that 10 parking spaces be on a pervious surface (this reduces storm run-off pollution). Their justification for the request was that they had reduced the impervious paving elsewhere on the parking lot and drive-through areas. The Commission unanimously guffawed, rejecting a change in conditions on an approval that was only granted earlier this year.
Posted by Stephen H. Devoto at 5:00 AM

Thank you Jennifer Alexander for standing to defend Main Street against this very unattractive future.

Regrettably, expedience and convenience have again prevailed, further reinforcing a desperate for revenue and incohesive planning philosophy that embraces any development that comes along. As one unfortunate decision follows another, our PZ and Chamber of Commerce combine forces to facilitate Middletown's bleak and ugly future.

This vision of The Inn at Middletown snuggled up with a dialysis center paints a pathetic picture. I just don't know whether to laugh or cry!

Anon 11:42 I couldn't agree more. Since I moved to Middletown 5 years ago I've seen the destruction of the Shiloh Church (which anchored my neighborhood) and what seems like an endless stream of pharmacies popping up everywhere! I applaud Jennifer Alexander's stand for Main Street. She is absolutely right and it is shameful that the coolest Main Street in the state is slowly being dismantled to fit the needs of unconcerned developers.

In defense of the medical center, clearly with the leaving of many familiar main street stores ( such as Midtown Photo, A New Page etc)- Middletown has to face the fact that little stores are closing due to this economy- so its either a medical center or another empty building on main street. The days of mom and pop stores are over, people don't want more gift stores; i don't like to face the times of big box stores either but thats the way it is. Its either we allow business in Middletown to develop and grow - whatever it is- even a medical center- or become a ghost town waiting for the return of some charming little mom & pops to try and make it.- I for one would rather see business and jobs brought to town.

The Community Health Center is on Main and is non retail- so why not another? why should they be the only exception? dialysis also serves the public-

Your defeatist, non-creative mentality encourages new problems. Give me even a fraction of an energetic Jen Alexander rather than the lassitude of an entire army folks ready to lick the boots of any developer that comes along!

Interesting how the artist's rendering makes Main Street look narrower. 3 or 4 lanes instead of 6. Very cozy. Would that it were so!

This center will not provide economic traffic for the Main St. Patients will need a number of hours for treatment and probably need to rest after being in the facility. This valuable spot directly off the highway will not enhance the area nor generate any job growth.Nice investment for certain influential persons.

Who are the beneficiaries of this whole Rite Aid/Dialysis Center shuffle? It is repugnant to believe that these projects are linked and that "following the money" will reveal an unsavory connection as inferred by Anonymous 1:45.

Why not locate the dialysis center in the existing "medical corridor?"
Makes sense, doesn't it? Oh, I get it.....

To bad none of you in opposition cared enough about our Main Street to show up and support Jen Alexander.

I personally think it is a good idea, other than West Hartford show me another downtown that is attracting investment.

Ms. Alexander's opposition to this development is clearly a self protectionist stance. The Community Health Center has plans and funding in place to grow their business in the North End and will begin shortly. So it does not surprise me that her and her husband would be against this. As far as a "corridor", Middlesex Hospital would never allow another "competing facility" to get anywhere near them. This development will again bring tax revenues to the City through business. The Community Health Center is funded by tax dollars and brings no real solutions to the table. The CHC building planned for Main and Grand is no better than this rendition. How can this building be "worse" than theirs? It gives the public another option for Health Care. Development of the downtown in this economy is a plus. Maybe the planning and zoning commission can do their jobs and actually develop a plan for Main Street.

When you walk on Main Streetand and you pick up a newspaper from the news stand next to the Fruitery, read it over breakfast at Ford News, stop at Pedal Power and Amato's, pick up a coffee at Klekolo's, and have lunch at Iguana Rana's, when you see friends enjoying one of the best Main Streets in New England, when you look back 15 years and remember what it used to be like..... If you have any pride and joy in our downtown, thank Jennifer Alexander. It has been her vision, her passion, and her dedication to our city which has made Main Street. She has worked brilliantly and tirelessly, not to advance the interests of businesses (although they have profited), not to advance the interests of politicians (although they take credit), but to advance the interests of Middletown and its citizens.

That's what it would have been, a futile "show" of support for Jen Alexander. What with the influential attorney, approval of the Planning Department and the endorsement of the Chamber of Commerce, this was another example of a "done deal". Six P&Z rubber stampers... Very discouraging.

I have to say the center core of Main Street was amazing yesterday with hundreds of parents and trick or treaters...keep up the good work all the parents I was with were thrilled about the vibrancy of their downtown, which yesterday was from the Police Department up to Public Market, SFAE, ATTRACTIVE, WALKABLE AND ENJOYABLE.