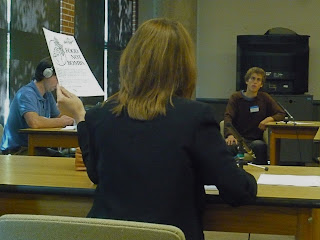 Middletown Health Department Code Enforcement Officer Sal Nesci and Sanitarian Fred Rehm testified Monday in a hearing at the State Department of Health to determine if the city was correct in its application of state statutes in ordering a cease and desist notice to Food Not Bombs.

Middletown has cited Food Not Bombs, and issued cease and desist orders indicating that the group is serving food to the public without a license. Food Not Bombs has participated in a shared meal, on public sidewalks in Middletown for nearly ten years.

Food Not Bombs insists the meal is shared, and not served, and so falls outside of the jurisdiction of state and local regulations.

Currently, Food Not Bombs continues to share its meals on the corners of Main and Liberty Streets every Sunday under a compromise which allows them to prepare the meal at First Church on Court Street.

The parties have not been able to agree on a long-term compromise to allow them to offer the shared meal to the public. 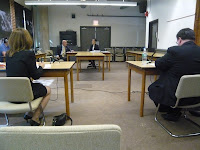 In cross examination Monday, Nesci explained that his department does not have guidelines for the interpretation of state statutes regarding licensing, but relies on the department's interpretation of the statutes. He was also unable to provide lawyers Peter Gosselin and Elizabeth Conklin, who represented Food Not Bombs at the hearing, with specific information about who made the original complaint against the group and when the original complaint was filed.

That original complaint, in November 2008 coincides with a November 18, 2008 email from New Britain health department employee Eugene Ciccone to Nesci in which Ciccone writes: 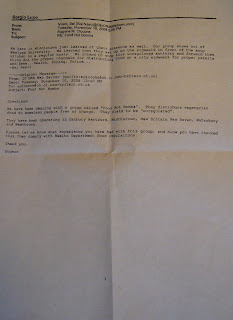 We have been dealing with a group called "Food Not Bombs." They distribute vegetarian food to homeless people free of charge. They claim to be "unregulated.'" Please let us know what experiences you have had with this group, and hiow (sic) you have insured that they comply with Health Department Food regulaitons (sic).

Nesci's reply, on the same day that "we here in Middletown just learned of their presence as well. Our group stems out of Wesleyan University." He continues, "We intend to stop this unregulated activity and forward them throu (sic) ALL the proper channels for distributing food on a city sidewalk for proper permits and fees...Health, Zoning, Police..."

While some Food Not Bombs members feel the New Britain memo has a political motivation, Attorney Gosselin could find no evidence of a vendetta.

"There's not anything in that memo that would indicate that it's concerning anything other than a health matter," Gosselin said outside the hearing room.

Nesci, and other Middletown officials have maintained that their only motivation in pursuing the matter is the health and safety of the public.

"We're not necessarily attempting to serve, but allow people to gather and share a meal," he said. "We gather and try to provide a testament to abundance instead of scarcity, and to promote the idea that everyone has the right to eat. We're trying to level the distinctions between haves, and have-nots. We offer ideas as well as sustenance."

Bobman allowed that part of the Food Not Bombs philosophy was to demonstrate that in a country which spends so much on national defense, there are still many who go hungry, and that the shared meals attempt to point out that disparity.

After today's hearings, attorneys from both sides will offer briefs to the Health Department, who will issue a judgment on the matter.

Food Not Bombs is also suing the City of Middletown, and the Commissioner of the State Department of Health in federal court for violating their rights to free expression as expressed in the first and fourteenth amendment to the Constitution.
Posted by Middletown Eye (Ed McKeon) at 1:46 PM