According to a source in the Police Department, an armed robbery just occured at TD Bank North on Washington Street, near Camp Street, and a possible bomb has been left behind.

Traffic on Washington Street may be interrupted as a result. No injuries have been reported. 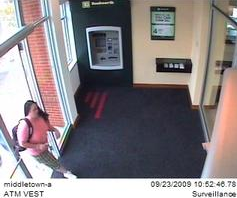 UPDATE FROM THE MIDDLETOWN POLICE DEPT.

The Middletown Police Department is currently investigating a Bank Robbery that occurred at the TD Bank North facility located at 911 Washington St, Middletown.

On 9/23/09 at approximately 10:58am Middletown Police received a report of a robbery at the above location. Initial investigation indicates that a white female entered the bank and approached the counter. The white female suspect then handed the teller a note that requested the teller to give her money. The suspect then placed an unknown type bag on the counter and advised the teller that the bag contained a “Bomb”. At this time the suspect was given an undetermined amount of money and fled the area.

It is believed that the suspect left in a blue van, possibly a Chevy, which was driven by an unknown black male and fled Westbound on Washington St.

Upon officer’s arrival the bank was evacuated, secured and the immediate area was cordoned off. Middletown Police obtained the assistance of the Hartford Police Bomb Squad who arrived a short time later. Members of the Hartford Police Bomb Squad entered the bank and their investigation showed that the bag did not contain an explosive device. The bag was removed from the building and Detectives from the Middletown Police Department proceeded with their investigation.

At this time Detectives are looking into the possibility that this incident may be related to other Bank Robberies that have occurred recently in Montville Ct and Westerly RI.