The Planning and Zoning Commission approved two small subdivisions at their biweekly meeting yesterday, and tabled the discussion of a third, much larger and more controversial subdivision application.  City Planner Bill Warner also discussed a recent Connecticut Supreme Court ruling which restricts the power of the Planning and Zoning Commission to require developers to build sidewalks and plant street trees.
"Off-site improvements"
Developers frequently ask Planning and Zoning for a waiver of the requirement to build sidewalks. While this may occasionally be motivated by a desire to save construction costs, it usually seems to be driven by a desire to attract home buyers who do not want to shovel snow or see people walking in front of their house.  In fact, I've heard neighbors of a proposed subdivision support the developer's request for a sidewalk waiver for the same reasons, expressing concern that sidewalks will "ruin the rural character of our neighborhood."
Despite this, many towns ask developers to construct sidewalks, deciding that the quality of life for both existing and future residents is increased by providing safe routes for children and adults to walk, and that sidewalks also reduce the cost of school transportation, as students can safely walk to neighborhood bus stops instead of being picked up at each and every house on a street.
Bill Warner reported about a recent CT Supreme Court decision in the case of Buttermilk Farms, LLC versus the Planning and Zoning Commission of the town of Plymouth.  Buttermilk Farms appealed a decision in Plymouth that required them to put sidewalks on a street which did not have them.  In their appeal they argued that the relevant statute "does not grant authority to the commission to regulate general health and safety, but, instead, it provides specific grants of authority to regulate health and welfare with respect to the land to be subdivided and the proposed streets within the subdivision."
The Supreme Court ruled in favor of Buttermilk Farms.  Bill Warner said that the Middletown City attorney interpreted the ruling to mean that Planning and Zoning has no authority to require a developer to put in sidewalks on an existing street. This also applies to requirements for planting street trees. Current P&Z regulations would apparently not hold up in court if challenged.
Two minor subdivisions approved
A two lot subdivision on Flynn Lane, off of East Street, was approved without any controversy. Planning Department staff requested street trees and sidewalks, which the developer had no objections to.  A second two-lot subdivision, on Ballfall Road and Sisk Street was also approved, but only after the developer informed the Planning and Zoning Commission that he did not want to put in sidewalks on Ballfall Road.  In light of the Supreme Court ruling, there was very little discussion about the developer's request for a sidewalk waiver.
Poplar Road subdivision is of concern to neighbors
Madeline Cerretelli, who has lived 37 years in a 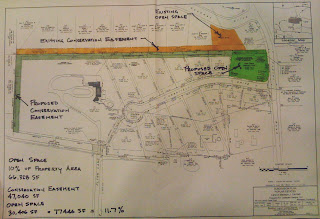 mansion off of Flynn road, is proposing to develop her property and put 14 houses on about two-thirds of her 15 acres, reserving a large lot for her house.  The development would be served by a new cul de sac called Cerretelli Drive.  She has asked for a waiver of the sidewalk construction requirement; in this case since the proposed street is entirely within a new subdivision, the Planning and Zoning Commission is not required to grant such a waiver.
Residents of a previously constructed cul de sac, Goodman Drive, which abuts to the proposed subdivision, expressed their concerns about the Cerretelli Drive project.  They pointed to the absence of a "Site analysis" and a "Landscape Plan", and objected to the lack of genuine open space being set aside. Residents in this neighborhood adamantly objected to any waiver of
sidewalk requirements, writing in a letter to the Planning and Zoning:

Anyone who lives in this neighborhood knows full well that the sidewalks in the area provide safe passage for young children and families. Each day, evening, weekend you can see neighbors come to Goodman Drive to walk safely. In fact, we would strongly recommend that the developer extend the new development sidewalks to connect to Goodman Drive as to provide a more "family friendly" environment.

Several neighbors spoke about traffic safety, citing Poplar Road as a dangerous thoroughfare between East Street and Ridgewood Road.   Neighbors were also concerned about the extent of blasting that would need to be done for the development, and the potential it has for damaging wells and foundations. There was extensive discussion about the impact of this development on the forests and wildlife which currently inhabit the lot.

Mrs. Cerretelli addressed her neighbors' concerns.  She reassured them about the blasting,  "Blasting can be noisy, but if the person knows what they're doing it's not a problem."  She agreed that there was a lot of wildlife on her property, saying that with all the developments in the area, including Goodman Drive, and Ted Bysiewicz' developments, all of it has come to her property, but then protested, "I can't keep their play yard, they'll just have to find another place."
Summing up, Cerretelli said, "I know nobody likes change.  But like anything else you get used to it."
Several of the Commissioners expressed their opposition to the sidewalk waiver request, pointing out that children usually liked to go down one side of the street and back the other.  Commissioners Catherine Johnson and Carl Bolz expressed their opposition to some of the lots, which were contorted into bizarre and untypical lot shapes to conform to the minimum acreage and frontage requirements.  Johnson called one of the lots, "the most ridiculous lot I've ever seen."
The Commissioners voted to close the public hearing, and then voted to table the discussion of the application, in order to have more time to study the materials provided by the developer.
Commission Affairs
Catherine Johnson reminded the other commissioners that there would be public meeting on the Plan of Conservation and Development on June 3oth, 6:00PM in the Hubbard Room of Russell Library.  She said that she would be giving both a written survey and a visual survey to all members of the public who show up, "People will be surveyed."
The Commissioners again failed to elect a chair, with Pelletier receiving 3 votes and Kleckowski receiving 4 votes.
Posted by Stephen H. Devoto at 5:00 AM