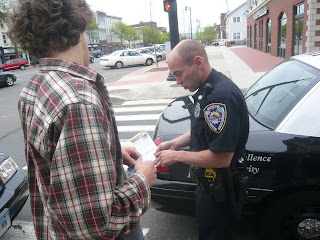 (Abe Bobman being issued a summons by the Middletown Police Department.)

From Food Not Bombs

Today Middletown Food Not Bombs filed for an injunction in federal court against the City of Middletown and the State of Connecticut to prevent enforcement of a cease and desist order barring the plaintiffs from political and meal-sharing activities unless the meals are prepared in a kitchen that is registered with the Health Department. According to the Health Department, sharing meals prepared anywhere else, as the organization and its members have for over ten years, is a violation of the health code. As a result of its cease and desist order, the City issued citations to two members of the organization, charged one of the plaintiffs with a misdemeanor, and seized and destroyed food prepared by the plaintiffs. Middletown Food Not Bombs has charged in its lawsuit that the order interferes with its ability to engage in constitutionally-protected expressive activity and has a chilling effect on the expressive activity of the group, individual activists, community members, and others.

According to Plaintiff Fred Carroll, a Middletown Food Not Bombs activist and Middletown resident who was issued a citation and is a plaintiff in the case, “Food Not Bombs has been sharing vegetarian meals and groceries in Middletown for at least ten years. For the last two or three years I’ve participated in the meal sharing on Main Street. I am not homeless, but I have not had a steady income during this time, and the political discussions and healthy and nutritious Sunday meals became an important part of my week. I recently became a more active volunteer with the organization. Sharing food with people is our way of saying that food is a human rig 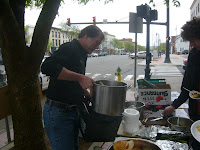 ht, that there is enough of everything to go around if communities were more empowered, and that everyone should be treated as equals.” According to the lawsuit papers, at least 20% of children in Middletown live in food insecure households, and roughly 2,000 families make use of the local food pantry.

Plaintiff Abe Bobman, a Food Not Bombs activist who was arrested in May for his participation in Food Not Bombs’ activities, stated: “Our weekly meals build fellowship, understanding, hope for a better world, and bring a voice of protest against systems of inequality. Sharing food with whoever wants to join us is how we oppose the hierarchy that exists where a few have much and many have little.” According to Bobman, the heart of the Food Not Bombs political message is a challenge on the assumption that there must be scarcity, hunger, waste and poverty. “Our actions are expressions of our belief that a world is possible where people work together to meet their basic needs and desires.”

Mr. Bobman, who is represented in his criminal case by Attorney Diane Polan of New Haven, entered a “not guilty” plea at a court appearance on June 17 and asked for a jury trial. “It is unbelievable that at a time of drastic cutbacks in state services, the State of Connecticut is wasting judicial resources on an unwinnable prosecution. Not only is this criminal prosecution a violation of Mr. Bobman’s First Amendment rights,” said Attorney Polan, “but it is also a case of illegal selective prosecution because the health department official who made the criminal complaint has admitted that Food Not Bombs is a leaderless organization. It is obvious that Mr. Bobman cannot be held criminally responsible for the actions of a political organization.”

According to the plaintiffs, Food Not Bombs does not “dispense food” in the manner that the city's health code regulates, like a restaurant or a soup kitchen. Instead, Food Not Bombs gathers as a community to share food, in the form of a potluck, as a statement of equality and abundance. As plaintiff Fred Carroll stated: “What’s next? The Health Department will come in and regulate people’s picnics in the park?”

The purpose of the injunction is to prevent the City from enforcing its Cease and Desist order while the organization’s lawsuit is pending. According to the injunction papers filed today, “As a result of the City of Middletown's actions, including issuing the cease and desist order, giving out citations, seizing pots and pans and prepared food, and charging plaintiff Abe Bobman with a misdemeanor, it is clear that Middletown Food Not Bombs members have been chilled in their First Amendment expression. Members are fearful of arrest, and are also fearful that the people with whom they share food - especially homeless people and other marginalized members of the community - will be put at risk of arrest if they are invited to share meals with members of the group. The City of Middletown's actions have forced Middletown Food Not Bombs to alter its activities. In some weeks, members have limited food sharing to the handing out of non-prepared healthy foods, such as fruits and vegetables. In other weeks, members have joined with volunteers from a local church who distribute food that has been prepared in a registered kitchen. Neither of these activities fulfills the mission nor permits the expression of the core beliefs of Middletown Food Not Bombs and its members.

Indeed, since being issued the cease and desist order in April, Food Not Bombs has been working for a solution that would allow the group to continue to prepare food and share prepared vegan meals in its long-time location on Main Street, outside the St. Vincent DePaul Place. St. Vincent DePaul Place operates a soup kitchen that serves meals six days a week; it does not serve meals on Sundays.

After two of its members received citations, and one was charged with a misdemeanor, Food Not Bombs decided temporarily to use the kitchen at the First Church of Christ in Middletown in order to continue their weekly food preparation activities. According to the plaintiffs, the use of the church kitchen has been a short-term solution that has allowed Middletown Food Not Bombs to continue to share food and engage in its ongoing political activities without further arrests and harassment by the City and/or state. It is not, and never was intended to be, a long-term or permanent operating procedure. As Bobman stated, “While the church has been extremely gracious during this time period, the activities and missions of the two groups are distinct and separate.”

According to Dave Rozza, a long-time Food Not Bombs activist in Hartford, Connecticut, “Given the situation in Middletown, I am convinced that the best option to maintain the long-term presence of Food Not Bombs in communities across the state is to challenge the city of Middletown and state health departments in a court case.” Rozza further stated that Food Not Bombs “opposes the logic of devoting so much of our country's resources to the military - $663 Billion in the next fiscal year - when so many struggle to meet their daily needs in our communities.”