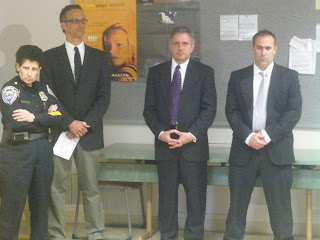 In a statement to the press just before 10 AM, Middletown Police Chief Lynn Baldoni indicated that murder suspect Stephen Morgan has connections in New York, Massachusetts and Colorado.

Roth said: "A beloved member of our community has been brutally murdered. Our deepest sympathies and condolences go out to the family and friends of Johanna Justin-Jinch. This is a tragic time for them, and for all of us in the Wesleyan Community. We are deeply saddened and shocked by the event."

We have been informed by Middletown Police of new evidence about the suspect in yesterday’s shooting. Although he apparently had a direct link to the victim but no other connection to the Wesleyan community, we have now been made aware that he expressed threats in his personal journal toward Wesleyan and/or its Jewish students. All students are urged to remain vigilant and to stay indoors. Additional security has been deployed accordingly.

We will continue to work with authorities to ensure the safety of students on campus, and there will be increased patrols by Wesleyan Public Safety Officers and Middletown Police. At this time we continue to believe that the safest place for students is in their residences and we will provide additional information as it becomes available.

Congregation Adath Israel, 48 Old Church Street, has canceled all activities (including the early morning services) and closed its office until further notice.

That's not the picture of the suspect that Wesleyan is circulated. Other sites are reporting that the wrong picture is being circulated (hint)