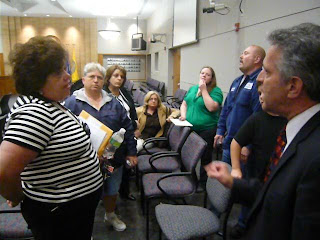 After the Common Council meeting Thursday a heated debate began between Council member Hope Kasper and AFSCME president Jeff Daniels about the merits of the rejected union concessions. Soon, mayor Sebastian Giuliano who had been talking to me about his frustrations with the Council budget entered the fray. Before long the fracas included Democratic Town Committee Chair Dan Russo, and Democratic Candidate for Mayor Dan Drew.

The debaters paired off and suddenly Mayor Giuliano and mayoral candidate Drew were having their first public debate. It was a loud and passionate debate about whether a tax increase is necessary to keep the city on an even keel. After ten minutes of trading opinions, the debate ended when Council member James Streeto entered and suggested that the sooner council chambers were cleared, the sooner janitorial staff could clean--up, and the city could avoid paying overtime. Giuliano and Drew shook hands and promised to continue the debate at a later date.

Mr. McKeon you are a dangerous man with that camera!!
-Nice work

PS... my opinion will always be first look at last year- no sale on RR
Second - look at next year Atena... GONE
Trouble lies ahead
again nice piece Ed

Ed,
Great job getting the video! It was certainly an eventful night. See you again soon!

Mr. Drew made several valid points during the course of this impromptu debate. I was impressed with his arguments and continue to feel that our current mayor has grown out of touch with the needs of his constituents. As a Middletown resident and taxpayer I cannot understand why Mr. Giuliano would continue to defend a budget that not only raised taxes during a time of economic difficulty but also cut valuable programs that have become a vital part of our community. The council did the right thing by overriding his veto and adopting the responsible budget that it had previously set forth.
It is time for a new voice in Middletown and in November Mr. Drew will be getting my vote.

To freckles - You have SO missed the point. A compromise budget was put forward which would have kept the tax increase at zero, restored program, put money back in to the fund balance and took union concessions. I was AMAZED watching last night to hear democratic council members say that the economic picture is bright and that we will worry about next year, next year. NO! I want the powers to be to worry about next year now! You are doing a disservice to the community by playing politics with this years budget only to turn around and kill the taxpayers next year. I am angry and for the first time in MY LIFE I am voting solid Republican. Middletown has got to be the only community in the state to throw union concessions out the window - unbelievable.

To Amazed: I am amazed that you are amazed!Eight Councilpeople just guaranteed themselves re-election.

Again, kudos to the Middletown Eye for being in the right place at the right time. I brought my 13 year old daughter to last night's city council meeting so she could experience local politics first hand. We stayed until they adjourned, but apparently left too early! But at least I can share the video with her when she gets home from school today. Thank you.

Ditto Amazed. Sounds like Drew is ok with a budget that would eliminate city workers jobs to make the cuts in the budget that are needed. Doesn't anyone ANYONE at all understand cutting jobs also cuts into programs and services offered by the city?? You can't have one without the other folks! Giuliano is making a valiant effort.

Anon 12:43, have you even been paying attention? It's Giuliano's budget that cuts jobs...in the police department, in our schools, etc.

....."Doesn't anyone ANYONE at all understand cutting jobs also cuts into programs and services offered by the city".....


I do. But this is what I understand even better. The Democrats have offered us a chance at a year without a tax increase without making those cuts that you speak of, and they did it without forcing the tax payers to pay for two years of job security for the city unions.
I'll take it!

To Well Aware - you are continuing to miss the point. A compromise was worked out that would have returned funds to the fund balance, restored programs, accepted concessions AND kept the tax increase at zero. How are you going to feel next year when the City loses Aetna? Are you going to be okay with a larger tax increase because this year the Democrats raided the fund balance so no buffer will be available. This has all been reported in the papers and I stand by my opinion that this is an election year ploy. How in God's name can the democrats say that it is okay to assume revenue that is not a given (Cucia Park) but its not okay to assume a tax loss that is a certainty. It makes no sense, it never will make any sense and you all need to hang on to your hats when your July 2010 tax bill comes around. I believe I actually heard one member of the democratic majority indicate that the recession is over and the future is brighter. Has anyone seen the latest unemployment rate? Recovery is occuring but it won't keep Aetna here nor will there be any substantial business growth by the October Grand list to minimize the impact. I don't think a person who reads or blogs on this page actually puts money in their checking account that they haven't earned but is okay with writing out checks any way.

Amazed, Amazed, Amazed! Have you not gone over to the Dark Side yet? I, for one, am seriously thinking about voting for Drew. After all, here is a leader who is going to fund all the City's pet programs,feed the hungry, house the homeless, refuse union concessions, lower taxes, AND hire cops! He's going to use found money from the Cucia Park sale (which hasn't happened yet), from Kleen Energy (which isn't built yet),and the General Fund (it's just hanging around gathering dust). I wouldn't count on any military money until I have the check in my hands.
Oh, by the way, that comment about the recession being over and the future looking brighter was taken from a speech by "Your President" (Sorry, Ed, but that is the way He refers to Himself).
Just think how great it's going to be with Mayor Drew and a Council full of...Democrats! Better start stocking up on food and water now. The Force is strong in that one.

No, I didn't miss your point. I just don't happen to agree with all of it.


.....A compromise was worked out that would have returned funds to the fund balance, restored programs, accepted concessions AND kept the tax increase at zero.....


If the city were seriously worried about their bond rating, or contimplating on going out to bond more city projects, I would be a bit more reluctant to agree with tapping the fund balance. However, I'm confident that the city won't be going out to the voters to bond any projects, anytime soon. Taxpayers are not about to vote themselves any additional tax increases.


..... Are you going to be okay with a larger tax increase because this year the Democrats raided the fund balance so no buffer will be available....


No buffer? That's the first I've heard of "no buffer". Don't be slighted if I don't take your word for that.

Losing any revenue isn't good. But losing revenue along with the right to cut back on staffing (if necessary )makes even worse sense. Which is why I disagree with you on the union concessions. Why should the city unions be the only ones getting two years of job security out of this budget? It's our money too, and we're not getting that.


..... How in God's name can the democrats say that it is okay to assume revenue that is not a given (Cucia Park) but its not okay to assume a tax loss that is a certainty.....


In all likelihood the Cucia money will be available in this budget. I can understand how some folks have reservations, considering what happened with RR. However, in spite of what happened with that property, Middletown survived that revenue loss. Just as I believe we will survive others if we have to.

Meanwhile, I'll enjoy the break while I can get it. Thank you.

You dems are nothing more then the clump of clay that the pottery workers YOU HAD TO HAVE IN THE BUDGET are...