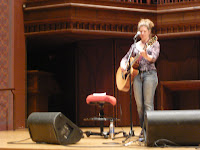 At the sold-out Dar Williams concert at Wesleyan's Memorial Chapel, Wesleyan president Michael Roth announced that fundraising built around the concert has raised $160,000 toward a scholarship fund to be created in the name of Johanna Justin-Jinich, who was murdered at the Red and Black Cafe two weeks ago.

Williams, a Wesleyan grad who is celebrating her reunion year this weekend at the college spoke about how Justin-Jinich will live on in the friends she has touched, and sang My Friends in her honor. Then she launched into, As Cool As I Am saying it was the song she though Justin-Jinich would want to hear.

Ed Thorndike, one of the owners of the Red and Black Cafe talked about "Yo" as he said Johanna Justin-Jinich was known to friends.

"I don't want to say things that will make anyone cry," he said from the stage. "We've been crying for the past two weeks." 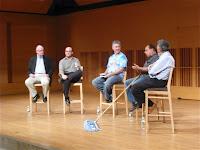 Thorndike thanked all those who had show support in the face of the tragedy.

At an earlier fundraise on the other side of campus, Crowell Auditorium was packed as Wesleyan grad, and NPR producer Doug Berman brought Tom and Ray Magliozzi, the Click and Clack brothers from the popular Car Talk show, and Peter Sagal and Carl Kassel from the equally popular Saturday morning NPR quiz and humor show, Wait Wait Don't Tell Me to talk about their careers and the shows the appear on. The quintet kept the room laughing for ninety minutes and the event raised $20,000 for Green Street Arts Center.
Posted by Middletown Eye (Ed McKeon) at 12:46 AM

Email ThisBlogThis!Share to TwitterShare to FacebookShare to Pinterest
Labels: Center for the Arts at Wesleyan, johanna justin-jinich