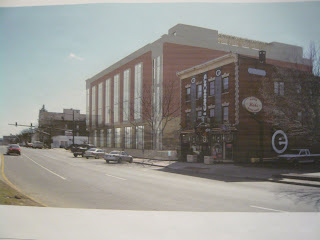 Representatives of the Community Health Center hoping to build a new headquarters on the corner of Main and Grand Street won approval to construct the building without retail on the ground floor level.

The new CHC will consolidate administrative offices and medical examination rooms from several Middletown buildings into the new headquarters.

Attorney Ralph Wilson, representing CHC, claimed that the Planning and Zoning Board had no authority to rule on parking, since the building is in a B1 zone, where parking does not have to be a part of a development package. Still he, and traffic and parking consulting engineer, Joseph Balskus spent an hour demonstrating how the CHC would be providing a net increase in parking in the North End, though the current lot of 55 spaces would be reduced to 29. Additional parking would be accessed by employees and patrons at a new lot next to the former trolley barn on Kings Avenue, and in the Liberty Square parking lot. 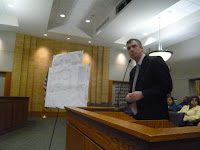 Mark Masselli, CEO of the Community Health Center, arrived to the meeting late as a result of meeting with Connecticut representaties in Washington DC today. Masselli addressed concerns of commission member Deborah Kleckowski who worried that approving an exception for a property which is not yet owned by CHC, and is, in fact, until April 1, out on RFP (Request For Proposal). Masselli explained that in the search for federal economic stimulus dollars, the process of vetting by municipal agencies has been compressed. He apologized for the need for haste, and city planner Bill Warner explained that CHC had accepted all responsibilities for liability if their plans were not approved.

"The building is another star for the North End," Masselli said. "We're hoping to do something our forefathers dreamed of for the North End. But we're in competition with 10,000 other applicants for stimulus dollars."

Eli Cannons owner Phil Ouellette appeared and spoke in favor of the development. 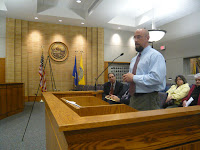 "We were in the North End before anybody wanted to be in the North End," Ouellette said. "And parking is important to our business. If the parking issue is to be solved as it was described, with better lighting, safer, and more aesthetically pleasing then it is now, I support it. This would connect us to the flow of Main Street."

Neighbors living in the homes at 12 and 16 Grand Street which will be demolished to make way for new parking worried about displacement.

"I would hate to see my home destroyed," said Brenda Stassola who lives at 16 Grand. "It would be a good idea if you could find me a place to move."

"I 'm hearing that this is a stimulus project," Patrick Young of 12 Grand Street said. "I'm a laid off construction worker, and I'd love to have a job working on this project."

For his part Masselli was open to helping in the relocation of families, hiring local workers and accepting design modifications for the building, including suggestions that a ground level brick wall on Grand Street include windows.

The commission also approved plans for a food manufacturing plant for Norpaco Gourmet Foods in the Liberty Commerce commercial park on Bysiewicz Drive.
Posted by Middletown Eye (Ed McKeon) at 12:02 AM

Thanks for the update on this project. A correction: the street where more parking will be created is actually Kings Ave., not Knights.

And a clarification: the Eye post states that the property "is, in fact, until April 1, out on RFP." Not everyone will know the meaning of this acronym for business jargon. I had to look it up; according to Wikipedia, "A request for proposal (referred to as RFP) is an invitation for suppliers, often through a bidding process, to submit a proposal on a specific commodity or service." So, I'm still not sure what this means for the property here, but I'll guess the developer is seeking bids from contractors, and thus the budget is not yet complete.

The Association of College & Research Libraries has posted a set of nearly 200 photos on flickr.com showing the construction and move-in to their new facilities at Liberty Square, the building on Main St. with It's Only Natural in the retail space. Have a look, there are a few shots of downtown Middletown: http://www.flickr.com/photos/acrl/sets/72157604368374700/.

Thanks for the correction Joseph, and the advice not to use jargon or acronyms that aren't easy to understand. I normally try to avoid both, and my only excuse is that it was written very quickly, past midnight, and I was looking past the article to an inviting pillow for my head.

Thanks, Ed. The Eye is a great resource & a valuable contribution to Middletown.

I previously asked but noticed no response...Is this building being required to be constructed using green intiatives? Will it use solar panels or fuel cells as a source of energy so that it is off grid? Will it be required to be built with eco-friendly materials? Does anyone care? We are so quick to spend money we don not have yet but are we spending it wisely? What will be done with the locations that the offices currently use? What will be the change in tax revenue for the town? Has anyone looked into this or again, do we care?

The building that is proposed will be LEED certified - sorry I don't know what level. Also, it will have a green roof, meaning that most of the roof will be a planting surface.

I don't think that Middletown has any codes or anything that would allow the city to require a developer to do something like solar panels - the LEED certification and roof were proposed by the developer not the city.

The plan is that the current office spaces would become retail, which would pay taxes.

Placing this building on main Street is outragous. It is going to have a major negative impact on the gateway to Middletown. In addition the building is ugly and out of character with Main Street.