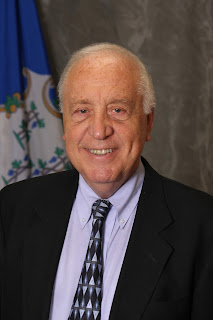 Submitted by the office of Joe Serra.
---------------
After serving residents of the 33rd Assembly District for nearly 28 years, State Representative Joseph Serra (D – Middletown) has announced he will not run for re-election. He currently serves as House Chair of the Aging Committee, and as a member of both the Transportation Committee and the Public Safety and Security Committee.

“After careful reflection and discussion with family and friends, I have decided that I will not be seeking re-election this November. This will provide me with more time with my wife Marie, children, and seven grandchildren. It has been an honor and a privilege to represent Middletown for the past 28 years,” said Rep. Serra.

"Rep. Serra 's long tenure in the legislature is marked by an unwavering commitment to serving his beloved hometown of Middletown, and a dedication to helping all of his constituents anyway he could," said Speaker of the House Joe Aresimowicz (D- Berlin/Southington). "Though we will miss our colleague, Joe Serra set an example for all of us on what public service is all about."

"Representative Joe Serra and the entire Serra family are dedicated to the people and places of Middletown. Joe's commitment to his constituents is legendary.  He is truly part of the fabric of Middletown," said House Majority Leader Matt Ritter (D – Hartford).

During his state service, Rep. Serra has been a steady voice for his constituents and helped secure necessary state funding for the city. As House Chair of the Aging Committee, Rep. Serra has steered bill proposals aiding seniors through the legislative process.

During the 2019 session, Rep. Serra advocated for a budget that implemented tax exemptions for Social Security income and phased in a tax exemption on pension income to make Connecticut more affordable for seniors. He also supported legislation to establish a publically-accessible database of individuals who have committed crimes against the elderly or persons with disabilities.

Rep. Serra has also served as a member of the legislature’s Finance, Revenue and Bonding Committee and the Judiciary Committee.

He is a lifelong resident of Middletown and has served on the city’s Democratic Town Committee since 1984, and had a long career in public service prior to running for the 33rd District seat in 1992.

Rep. Serra served the Middletown Department of Public Works for 37 years, starting in 1959. He was appointed Deputy Director of Public Works in 1979 and held that position until he retired in August 1996.

In addition to that role, Rep. Serra was an officer and member of the American Federation of State, County, and Municipal Employees, was president and vice president of the Middletown Managers and Professionals Association, and is a former member of the City of Middletown Retirement Board.

Rep. Serra also served as Secretary-Treasurer of the Connecticut Association of Street and Highway Officials for at least 40 years, and was a member of the Middlesex Community College Foundation Board of Directors.
Posted by Reader Submitted at 8:34 AM