Submitted by Sacha Armstrong Crockett
-----------
I’m about as townie as they come. I was born and raised in Middletown. My parents were from the South so a fairly liberal college town seemed like a perfect fit for a better life. I lived in Wesleyan Hill most of my life until we moved to the Westfield side of town. Education was a priority to my parents so from Little People’s to Wesley, WWMS and Mercy - my parents did all they could to give me and my sister what they didn’t have growing up in Tennessee. I eventually moved back home to Middletown to take care of my sick father and I have basically been here ever since.

Although I miss my parents dearly I’m glad they are not here to see the current intolerant, cruel and disgusting culture that has taken over the local republican party like a cancer. I was naive enough to believe if I got involved on a local level I could protect our sweet town and my family from this toxic behavior. That voyage eventually lead me to volunteer for the naming committee for WWMS. I was so excited that I live in a town that dares to have the tough conversations and felt honored to sit on the committee. 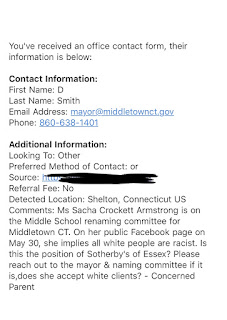 The culture that caused a Middletown Republican to contact my company to tell them I’m a racist. (see attached image - cowards used the mayors email and the BOE number as a contact; this is currently under investigation) Isn’t that rich!! Now I’m the racist. The fact is they know I’m not a racist but they also know that there is a huge likelihood that the person responding to their email would be white. They will claim that’s not privilege but be clear that is exactly what it is. It’s the same privilege culture that feeds the audacity to call the police on a picnicking black family.  The same privilege culture that tries to soften the damage Woodrow Wilson inflicted on black people with excuses.  A man who died a racist and never saw the errors of his ways. There is no excuses for him that will change how I feel about my son dripping in all his Black Boy Joy walking into a school built in 2019 named after a known racist. I’ll never be okay with it because I know better than I did when I walked into WWMS in the 90’s. I'm also uncomfortable with the message it sends black and brown children about their worth and value. Walking into a building daily named after a man that didn't want blacks and whites to live and learn together just doesn't make sense to me in 2019.

This is why this election is so important. The people that will have the power to make this name change happen will be voted in on November 5th. It is paramount that we support row A and Ben Florsheim to make sure Middletown remains a place that has the tough discussions and makes remarkable changes to improve the lives of all our citizens. A place with Pride Parades and healing ceremonies to honor the painful voyage of the forced migration of the Middle Passage. I would never imagine that I would have to go to the police over cyber stalking and harassment because I joined a BOE committee but here we are.

I totally understand if you disagree with me. We just think differently about what’s important and that’s okay. You don’t need my permission to have your own opinions. I don’t need yours. I wouldn’t attack your family and I deserve the same respect. At the end of the day we are neighbors.

The culture IS here allies and friends - we all need to show up and support the people that will give us a better chance at a whole, happy and safe life here in Middletown. Vote Team Row A and for Ben Florsheim for Mayor.
Posted by Reader Submitted at 7:00 AM