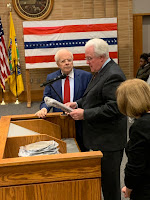 The first hour of the last regular meeting of the Common Council was devoted to paying tribute to the 8 members who are not running for re-election, as well as to Corporation Counsel Daniel Ryan. 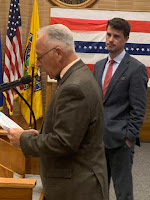 The festivities started with Councilman Gerry Daley praising and thanking the service of Ryan, who has served 3 different mayors, for a total of 18 years. Daley said, "I don't know what the council is going to do without him!" Mayor Dan Drew also gave extensive praise of Ryan. All rose to applaud Ryan.

Councilman Grady Faulkner lauded Bishop Vance Cotten, who in finishing the term of Tom Serra, served as Councilman for 8 months. Drew also praised Cotten as a leader in the community and for his service to the city as a public servant. All rose to applaud Cotten.

Councilman Gene Nocera lauded Councilman Carl Chisem, saying that Chisem has embodied an important principle, "Service to others is the best we can do." Drew effusively praised Chisem, in particular Chisem's role in the re-organization of city hall, combining the legal and human resources departments and the parks and public works departments, which Drew said has saved the City "millions". All rose to applaud Chisem. 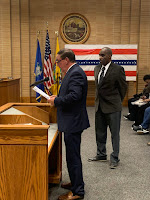 Councilman Phil Pessina spoke about Rob Blanchard, reciting his 4 years of service to the Council. Blanchard thanked everyone on the Council, "It's been a huge honor." Drew said nothing about Blanchard, and remained seated with his arms folded while everyone else rose to applaud Blanchard. 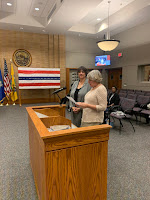 Pessina also lauded Councilman Bob Santangelo, "26 years, but your legacy will carry on, by virtue of the legacy of your fight for our veterans, and our citizens." He quoted a poet, "Life starts all over again when it gets crisp in the fall." Drew thanked Santangelo for his long years of service, "I was in 7th grade when you began your service." He effusively thanked and praised Santangelo. Santangelo reminisced about his years, starting with his youth, "I was not baptized Catholic, I was baptized Democrat." All rose to applaud Santangelo.

Faulkner also lauded Daley, who has served on the council for 26 years, under 5 mayors,"We thank him .... for his selfless dedication and commitment to the place he calls home." Faulkner went on, "For me personally, Gerry is one of my go-to guys, ...  he has a lot of knowledge." Drew said "Gerry Daley's fingerprints are all over [the renascence of Middletown] ... he has been involved in every single ... economic development in the city of Middletown." Daley lauded his own work, that of the Chamber of Commerce, and that of Wesleyan. He also thanked the city staff, and former Director of the Planning Department, "Bill Warner in particular".  All rose to applaud Daley. 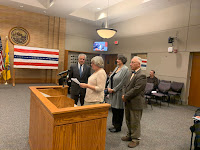 Councilwoman Linda Salafia lauded Councilman Seb Giuliano. "Mr. Middletown is really a better name for you than for that real estate agent."  Giuliano said, "It has been a privilege and an absolute joy to serve with each of you." He added, "Finally, I would be remiss if I didn't thank you, Mayor Drew.  you have shown me respect and I appreciate that ...  I want to wish you the best for you." All rose to applaud Giuliano. 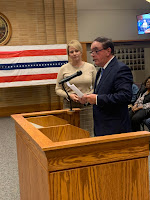 Nocera lauded Councilwoman Mary Bartolotta, in particular her efforts on behalf of the environment, veterans, the parks. Nocera said, "She has also been a steadfast advocate for the police and firefighters."  Nocera said that when he first ran for the Board of Education, he knocked on doors with her, and he admired her knowledge. "She understands city government, she does her homework. She will be missed." Mayor Drew also thanked Bartolotta for her work on the building committee and for her advocacy on behalf of the environment. Bartolotta thanked her family, city employees, and friends she has made throughout the community. She said that she would be staying involved. All rose to applaud Bartolotta.
Posted by Stephen H. Devoto at 8:42 PM

It appears that Mary Bartolotta missed out, as much as she will be missed. My hope is that she will stay thoroughly involved with city matters over time and run again for office. And win. Middletown needs more good (women) people!