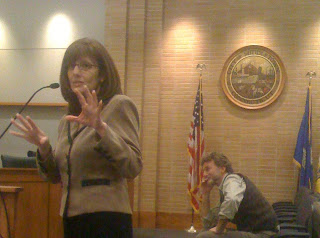 The Planning and Zoning Commissioners set aside most of their regular business at Wednesday's meeting, so that they could hear from the Town Planner of Hamden, Leslie Creane.
POCD Overhaul and the use of charrettes
Creane was invited to speak by the P&Z Commission because she has guided Hamden through substantial changes in their Plan of Conservation and Development (POCD).  Middletown is in the middle of re-writing our POCD, and Catherine Johnson and other commissioners felt it would be useful to hear from Creane about the approach that Hamden took.
Creane said that in 2007 the Hamden city leaders decided to sanction a "complete zoning regulation overhaul".  They hired consultants to help the town through the process. The central mechanism for re-writing the POCD was 5 long days of charrette.  This was a process where multiple people, in this case city officials, consultants, and most importantly members of the public, worked with large maps and design boards to discuss the future of the many different neighborhoods that make up Hamden.  A combination of sticky notes, pencils, and discussions allowed the public to help shape the POCD, and allowed Creane and the Planning and Zoning Commissioners to gauge public reactions to various ideas.

Creane said she was overjoyed at the turnout for the charrettes in Hamden.  She said that while Planning and Zoning meetings tended to always have the same members of the public in attendance, the charrettes attracted an entirely new and much more diverse group of people.
Creane and her staff took the input from the charrettes and used it to prepare a draft of new regulations. She has spent considerable time during this process going out to speak at neighborhood and other civic organizations, explaining and defending the new POCD to citizens who are concerned about its implications for their areas of interest.
Form-based Zoning and SmartCode
Hamden plans to take an unusual approach to zoning in their new plan.  Most cities, like Middletown, have exclusively "use-based zoning", we have zones for industrial, zones for residential, zones for commercial, etc.  In contrast, the Hamden draft POCD is based to a very large extent on "Form-based zoning", which emphasizes how buildings shape how residents interact with each other and with their environment.  In form-based zoning, there are far fewer restrictions on the use of land (although there still are some), but the zoning pays much closer attention to such things as the size of buildings and how they are placed on the land.
Creane also presented Hamden's movement towards adopting SmartCode principles into their POCD. SmartCode is a template which allows individual towns and cities to create ordinances that foster walkable neighborhoods.  It promotes one set of form-based zoning.  Hamden is the only town in Connecticut that is in the process of incorporating SmartCode principles into their POCD. The only other towns in New England that are doing the same are Montpelier (Vermont), Jamestown (Rhode Island), and Dover (New Hampshire).
The guiding principles of Hamden's POCD seemed quite appropriate for Middletown, Creane said they included 1) coherence of zoning, 2) an increase in commercial tax revenue, 3) preserving the environment and open space, 4) increasing safety of pedestrians and cyclists, and 5) regulation of building forms. She said that they took great efforts to "Clearly state the intent of all regulations: to improve the health, safety, and welfare of the residents of Hamden, and to preserve the environment."
The majority of the Commissioners were enthusiastic about Creane's presentation, and thanked her profusely for coming up to Middletown.  Creane told them it was her pleasure, offering up the statement, "I am passionate about city planning."
Regular Commission Business
The Commissioners took care of regular business very rapidly, before the presentation by Creane.  Two separate business expansions were approved, one by Mack Fire Protection on Industrial Park Place, and the other a car dealer on Newfield Street. The commissioners again failed to elect a chair, Richard Pelletier, nominated by the James Fortuna and seconded by Barbara Plum received 3 votes, and Deborah Kleckowski, nominated by Ron Borelli and seconded by Les Adams, received 4 votes.  5 votes are needed to elect a chair and thus Pelletier remains as acting chair.
Carl Bolz reported that the Bylaws subcommittee was moving ahead with their work, and would hold the next meeting on May 20th at City Hall.  Catherine Johnson invited members of the Commission and members of the public to attend the workshops on the Middletown POCD. She said the next one would be on transit (buses, streetcar, bike routes), and would take place next Thursday at 6:30 in the Hubbard Room of the Public Library.
Posted by Stephen H. Devoto at 12:01 AM

The Planning and Zoning By-Law committee is holding a workshop on the changes to the By-laws on Wednesday May 20, 2009 at 6pm. I I believe the room for the meeting is a conference room in City Hall. You will need to call the Planning Office to confirm.

The workshop is an opportunity to add your comments to By-laws. As many of you are aware, the P&Z Commission has struggled with elections and other matters. It is crucial that a document be developed that clearly addresses procedural matters and standards of professional conduct. I encourage people to attend the workshop and I look forward to hearing input from the public.

On a separate issue, the presentation last Wednesday night at the P&Z meeting was very enlightening! We, as Commissioners, are lay people, and professional development is absolutely critical to ensure we are as educated as possible to properly represent the interest of the City of Middletown and its' residents. Thank you to Commissioner Johnson who arranged the presentation. I look forward to other Commissioners bringing forth ideas for additional workshops and presentations.

The Plan of Development is also in progress. The next meeting is Thursday May 21, 2009 at 6:30pm in the Hubbard Room, Russell Library. The Plan of Conservation and Development is the blueprint for development of the City. It is important that as many people as possible provide their input into the future design of Middletown.

I look forward to seeing many of you on May 20th and May 21. Please do not hesitate to contact me if I can be of assistance, debilee@hotmail.com

I think that the Town of Hamden is being very proactive in there addressing of Planning and Zoning issues that come before them, it would be prudent for the City of Middletown to take a very close look at this model and grow upon it as it has already had its wheels in motion and seems to be a very promising solution to many difficult agendas that have been brought before our Commission and our Board of Appeals.
A perfect example would be Miss Patsy's lunch wagon that has been ordered to close, is seems to me that the Town Planner of Hamden, Leslie Creane has discussed this type of land use and its values to Towns and how to address the use of the land to suit the neighborhood in a positive way and to appease both the landowner and its neighbors for the betterment of the community as a whole and not just a select group or any one individual.
Lets move forward and make Middletown a role model for other towns and cities in the Northeast.

Hamden would kill for our downtown !! I lived in Hamden and its no where near as nice a place, simply spill over from New Haven, the good and the bad.

The ideas are interesting but are there developers that will build it, seems like towns, including ours are always planning and zoning for things that the market cant support.