"The stars were aligned," was what one of the commissioners said to me at the end of the meeting, referring to the set of circumstances that allowed the Planning and Zoning Commission to elect Richard Pelletier as chair, and Barbara Plum as vice-chair. The Commission also approved a revision of their bylaws. All of this was in addition to discussing and voting on three applications which were the subject of public hearings.
No more acting as chair
After 9 months of failed elections, the commission elected Richard Pelletier as its chair. This puts an end to the twice monthly struggles which started last November with wrangling over the voting process itself, and then continued when no candidate was able to garner the required super-majority of 5 votes.
For the past few months, Deb Kleckowski and Pelletier have been nominated for chair. Pelletier has always gotten all of the votes of the Democrats and Kleckowski has always gotten all of the votes of the Republicans. It seemed that the only path out of this impasse was for one party to miss a meeting.
This is what finally happened last night; all of the Democrats attended, but three Republicans were absent. Kleckowski herself was not present, Ron Borelli came for a few minutes at the beginning of the meeting but had to leave, according to Catherine Johnson, "because he is going away in the morning." Their absence led to the seating of two alternates, and since Republican alternate Nicholas Fazzino also was absent, the seating of Quentin Phipps and Carl Bolz gave the Democrats 5 votes.
Les Adams gamely tried to nominate fellow Republican Johnson, but she demurred with a guffaw. Pelletier received 6 votes, with only Johnson voting against him. Having been elected chair, Pelletier then opened nominations for vice-chair. Plum and Kleckowski were nominated, and Plum won by a vote of 5 to 2.
All of the Democrats, as well as Adams, seemed happily relieved that the election of officers had finally been concluded. Pelletier will be chair until the first P&Z meeting after the November municipal elections, when the commission will again elect officers.
By-Laws distributed, read, discussed, and passed
The By-Laws have also been the subject of many commission meetings, with discussions of the process of By-Laws revision beginning in earnest in March. In April they voted to establish a By-Laws committee, and in June they began to vote on the simplest of the bylaws. In July commissioners realized that they were not all working from the same draft By-Laws, and in August they unexpectedly canceled a meeting.
When the By-Laws discussion began at last night's meeting, it seemed briefly that commissioners might stay true to form. Adams appeared to not have the relevant copy of the By-Laws revisions, and Pelletier called a 5-minute recess to allow Planning Director Warner to make another copy and to put everybody on the same page for the discussion.
Vice-chair Plum, as chair of the By-Laws sub-committee, approached the discussion having put in a lot of thought about the By-Laws in advance. Johnson, Phipps, Bolz and Adams also contributed actively to a thoughtful discussion. Chairman Pelletier seemed to be reading the proposed By-Laws for the first time, expressing repeated confusion over the process by which the commission was proceeding. Secretary Fortuna was laconic, not offering an opinion about any of the suggested changes.
The change in the By-Laws that generated the most discussion was (not surprisingly) a possible change in the procedures for electing officers. Two additions to current procedures were considered for a situation in which no nominated candidate receives the necessary 5 votes to be elected. One was to select officers by raffling a name out of a box. In the public comment period at the beginning of the meeting, a member of the public, Arline Rich, spoke out forcibly against this proposal, saying that this option "is just ridiculous, and, if approved, the city would be disgraced nationwide." The other option the commissioners considered was to select officers on the basis of which commissioner got the most popular votes in the most recent election.
In the end, the commissioners rejected both options, heeding the advice of the city attorney, who advised them that any means of electing an officer other than by their own vote would likely be illegal. Thus, the method of election will remain unchanged, although the language clarifications should prevent a recurrence of the kind of wrangling over process that took place last winter. Other changes to the By-Laws provide for better definition for the conduct of public hearings, for the expectations of both regular and alternate members, and for the standards of ethical conduct.

One of the most remarkable things to long term observers of Planning and Zoning meetings was that the entire By-Laws were read and approved in little over an hour. The dialogue was respectful, the lines of disagreement were not large and they cut across party lines, and there was substantive give and take. Almost every change in the By-Laws was approved unanimously.
Adaptive Reuse I: NO in the Village District
Two applications for adaptive reuse were considered prior to the election of officers and voting on the By-Laws.

The owner of a house on College Street applied to the commission to convert two rooms into professional offices. The house is within the Downtown Village District, which was established to encourage residential uses of buildings in the areas around Main Street. David Kennedy told the commissioners that he needed to improve the cash flow for the house, to generate income necessary for the maintenance and improvement of the house. He pointed out that there were many offices on College Street, most of them owned by Wesleyan.
Jen Alexander, who played a major role in the establishment of the Village District, spoke of how important it is for the revitalization of downtown that the area's houses be kept in residential use, "While office conversion maintains the shell [of the building], it does not maintain the community of a neighborhood." She also read from a letter by Mary Alice Haddad, who lives only one lot away from the property in question, "Ours is a lovely community that has seen dramatic improvements in recent years ... houses in our area are in demand once again. Please help us protect and build on this success in revitalizing a core neighborhood in downtown Middletown."
Kennedy told the commissioners that it was unrealistic to imagine that his house could again be the home of a single family, indicating that it was obsolete, "It will never be a one-family house again, ... it's a large space, ... it's not a cohesive space." 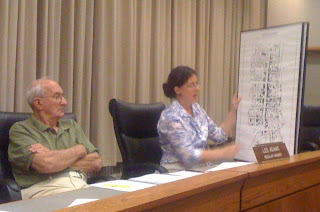 The only commissioner who agreed with Kennedy was Johnson, who said she owns a house on the same street and also was interested in renting professional office space, "It is very hard to find [residential] renters right now. I specifically bought my house because it could be mixed use."
Johnson showed her fellow commissioners large boards with maps of the downtown area, one showing the historical distribution of houses and one showing the current distribution of houses. Johnson pointed out that much of the property between Main Street and the River had been converted from housing and professional offices into strictly office and commercial space. She urged commissioners to reexamine the Village District zoning, and to take away the restrictions which prevent the conversion of residential spaces to offices, saying that if this was not done, there was a risk that during the day the neighborhood would empty like suburbia.
Other commissioners were not swayed, and voted to deny the application.

Adaptive Reuse II: YES in Westfield
The owner of a house on Middle Street applied for a special exception to allow her to convert vacant professional offices into three one-bedroom apartments. Director Warner told the commissioners that this was exactly the kind of situation for which historic adaptive reuse was designed. He told them that a commercial use would allow any changes ("... could wrap the house in granite and neon lights!") to be made to the house, while if the commission approved a historic adaptive reuse, they could place restrictions on the changes that could be made to the structure.

Arline Rich, chair of the Westfield Residents Association, expressed the WRA's misgivings about the proposal, citing inadequate parking, no play area for possible children in the apartments, and incomplete historical restoration of the building. Warner suggested that if the commission approved the application, they should require the owner to submit suggested modifications to the Design and Review Board. The commissioners unanimously approved the application with this condition.

Adaptive Reuse, to be continued.
The application for conversion of a day care near FoodMart on Rte 66 was withdrawn because of inadequate sign notification. The application for adaptive reuse of a three-family house on Broad Street into insurance offices was scheduled for a public hearing on September 9.
An application to subdivide a property on Brush Hill Road was also approved at last night's meeting.

Disclosure: I am vice-chair of the WRA
Posted by Stephen H. Devoto at 10:30 AM