The rest of the Common Council meeting

The first 2009 meeting of Common Council was a long one, with extensive discussions of a diverse set of issues. Two of these are covered elsewhere in The Eye (Schiemann celebration and Kolman composting). In other business, the Council approved the acquisition of two significant properties for open space, approved hiring two new computer support staff, established a committee to assess the fire safety costs in Middletown, authorized a grant application for studying housing units in the downtown area, and designated January 20th as Middletown Community Conversations Day.

The Council approved a loan of $500k from the general fund to purchase the 131 acre Hubbard property on Chamberlain road. The loan will be paid back with a $500k grant from the state (Eye article). This property includes Mount Chestnut, the 3rd highest peak entirely within Middletown (one of my "Seven Peaks in Seven Days"). Ellen Lukens, who has served on the Conservation Commission for 8 years, said it is the property most worth of protection that she has seen. Katchen Coley spoke of the scenic view, the adjoining open space, the recreation possibilities, and the number of houses that could be built on this land if the property were not protected. Guy Russo, speaking as the Water and Sewer director, spoke to the protection against flooding that this undeveloped property gives to neighboring properties and roadways. 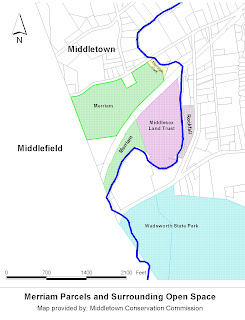 The Council also approved the expenditure of $250k from the open space bond monies to protect 25 acres of the Merriam Tree Farm near George and Middlefield Streets. Bob Merriam, whose Great-grandfather built a woolen mill on the property in 1870 to make horse blankets, and whose father raised chickens there and sold them downtown, stayed to the end of the meeting and was delighted to see the Council's approval. The sale price ($10,000 per acre) is considerably less than the property would be worth to a developer. The Middletown portion of the property is very close to large housing complexes (notably the Sagamore Towers on Route 66), and is on a bus line. These features make this property highly accessible to many residents who might not otherwise enjoy open space. Kate Miller spoke to the importance of this parcel of land for the health of the Coginchaug River. An adjacent 25 acres of the Merriam Tree Farm is in Middlefield, and both Merriam and the Selectmen of Middlefield expressed their commitment to preserving that land as open space as well.

Information Technology Expansion at City Hall
Bill Oliver, director of Information Services for the city, has requested several additional employees for technology support to other city agencies. In an executive session prior to the main meeting, Mr. Oliver briefed the Common Council on security and other issues that necessitated hiring a Network Coordinator and an Infrastructure Engineer. Council members expressed varied concerns about adding two new employees to the city payroll. Tom Serra suggested waiting a few months, Earle Roberts demanded a quantitative measure of how much improvement would result, and Ron Klattenberg suggested that the Information Technology departments of the City and the Board of Education should work together to reduce costs. Only David Bauer objected on principle to the hiring of two new employees, "We're adding some very very expensive personnel to the city's workforce. Until we exhaust every other possibility ...."
All of the positions were approved by the council. 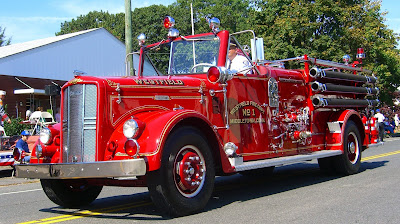 Committee. The cost of fire services has been very contentious (Eye Article), in part because different districts pay different tax rates for their protection (South District pays a mil rate of 3.4, Central 5.0, and Westfield 1.0). This resolution was amended to specify that the committee would be composed of 2 members of the council (representing the Central Fire District), 2 members of the South District, and 2 members of the Westfield District. It further specifies that "the work of this Committee is limited to strictly advisory and shall not consider the issue of consolidation of the three departments..."

Downtown Housing Study
The council unanimously authorized the mayor to submit a grant to hire somebody to study the creation of new housing units in the downtown area (Eye article). The initial work, which would be done through the Department of Planning, Conservation and Development, would be simply to inventory the number of housing units available. Concern was expressed on two fronts, first that parking issues be addressed in any study about bringing more residents to the downtown, and second that school issues be addressed to ensure that already over-crowded schools would not receive even more students.

Community Conversations
The council unanimously passed a resolution designating January 20th as Middletown Community Conversations Day. On that day, community groups will gather at many venues throughout the town to discuss the issues most important to Middletown. The gatherings will take place at noon and 6:00PM in the Russell Library, and at times throughout the day at other venues.
Posted by Stephen H. Devoto at 2:03 PM

Concerning the anxieties about sufficient parking in the paragraph about the downtown housing study: It would be a great shame if the development of more owner-occupied housing in the downtown neighborhoods were to be held hostage to the automobile, given that this device has done more to cause the decline of the traditional urban centers than any other in American history. The reality is that there is plenty of parking in the downtown, as was noted in several of the parking study meetings last year. And one advantage of living in the downtown is that it reduces the reliance on the automobile, which can translate into fewer cars clogging our neighborhoods. We should be turning parking lots into housing and retail, especially on Main Street.

Yes, if only there were a "problem" about parking , how fortunate for downtown!