The Arrigoni Bridge in New Britain 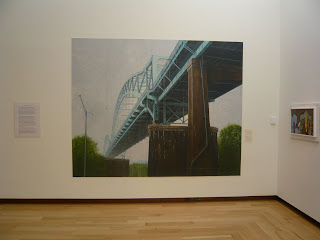 I was surprised, as I am usually pleasantly surprised on any visit to New Britain's wonderful Museum of American Art, to find a large canvas I hadn't seen before.

It's called "Bridge," and is a heroic depiction of the very canvas-worthy Arrigoni Bridge. It's part of a series of monumental architectural oils that Waite has become known for.

If you've been around the area long enough, you may remember Waite as a cartoonist for the Hartford Advocate in its early years. He created a series which foreshadowed Keith Haring, and was as pointedly political, and completely hysterical, as any cartoon series about Hartford since.
Posted by Middletown Eye (Ed McKeon) at 8:28 PM

Thanks for the post, Ed – a great museum (and one that is still committed to offering free admission on Saturday mornings. Passes are also available at Russell Library).

If you didn’t already know, Peter Waite teaches drawing and painting classes at Wesleyan in the GLSP program. I had the pleasure of taking his class last summer and thought it was great that he would commute to class on his bicycle – from some distance – by way of the Arrigoni Bridge. The funny thing is, he often talked about that vantage of riding into Middletown from the bridge, but I can’t recall him ever mentioning that he had painted it!

So I, too, was surprised to discover his monumental “Bridge” on a visit to the NBMAA in the fall, and was happy to see that it was still on display when I returned a few weeks ago.

By the way, his class was titled “Drawing from Middletown: The Moral Landscape.”

The bridge has a graceful form. In my opinion it would have been "gilding the lily" to have added the lights that were proposed not long ago.

hmmm, i wonder who anonymous is