Casting Reserve to the Wind 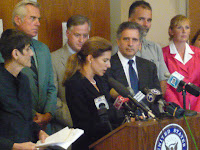 In the Commentary section of Sunday's Hartford Courant are two opinion pieces, one which deals directly with a problem Middletown faces, one tangentially.

Secretary of State Susan Bysiewicz published a piece in which she invites Governor Rell, the Commander-in-Chief of Connecticut's Army Reserve, to get involved in the controversy over placing an Army Reserve Training Center on parcel of land in Middletown. To her credit, Bysiewicz wants the governor to force the Army to adopt principles of Smart Growth in the development of their base. This would include the consideration of brownfield development, and in one specific case (the Pratt and Whitney property on Saybrook Road), property which was made a brownfield by the Federal government.

Bysiewicz, as is her right, feels that the Army Reserve Training Center would be good for Middletown, as long as the right parcel is found. She raises the specter of 9/11 as she champions the need for a regional location for Army National Guard and Reserve training. She indicates that the base would be an economic boon to the town.

I haven't heard a single person argue with the notion that the Guard and Reserve deserve, and need, up-to-date facilities for training. But it's not about building suitable training facilities; it's about building them in the right place.

And Middletown is not the right place.

Seems obvious to me.

The Army needs to look elsewhere, and the BRAC law leaves a gaping loophole to allow them to do so. It says the base should be build in Middletown unless a suitable site cannot be found. The next step seems obvious - look elsewhere.

And Middletown will not be losing out on some fantastic economic boon. That's a canard that's easily disproved, even as the Army Corps manipulates the number of employees it suggest will work at the center, to serve whatever argument they happen to be making at the moment. No one has suggested any specifics about how the Army Base will actualy generate anything but marginal and insubstantial ecomomic activity for this town (or for any town, for that matter).

And Middletown will not be unpatriotic for turning the Army away, as a letter to the Courant suggested on Saturday (We're at war? And so now Middletown must bear the burden of George Bush's mistakes?) Middletown already bears a disproportionate number of properties that are off the tax rolls because they are state facilities. As the city with the only statewide mental health hospital, we also host a prison facility for teen offenders, and the remaining state-run facilities for narcotics abusers. As a result, there are a host of associated non-profit facilities which are exempt from taxes. These facilities already put an undue burden on city resources. The army base would be built with federal dollars (those are your taxes too), but the city will have to maintain infrastructure to support the base wherever it is built.

And so, if I may be so bold and unpatriotic to suggest, the Army ought to take a long hike out of Middletown.

Which leads me to Tom Condon's thought-provoking column about charrettes, a means by which towns are involving all citizens in planning their towns' futures. In Simsbury and Hamden, progressive town governments are using charrettes as a way to create a vision of their communities which include Smart Growth principles, and principles, strategies and techniques of new urbanism. In Middletown, which has a regrettable history of development deals done behind closed doors, this invitation to planning involvement could go a long way toward avoiding the last-minute showdowns between big box builders, and outside developers who apparently view Middletown as an easy mark for schemes which can re-shape a city which doesn't have a firm plan in place to control developers. We need a plan that residents can own, buy into, and stand behind. A charrette is a good place to start.
Posted by Middletown Eye (Ed McKeon) at 6:47 AM

The Pratt and Whitney property that S. Bysiewicz has referred to is on River Road.

I am not the first to remind Ms. Bysiewicz that she is the CT Secretary of State, and has a duty to all of the people of the State of Connecticut. How would the Army best be served? I think the Army should look in a wider area for this regional consolidation. Why restrict the search to Middletown? And as for locating this large facility at Pratt and Whitney on the Connecticut River waterfront, I believe it would be a step backwards to a time when industry was conveniently on water ways to help primarily with with waste disposal. Our ideas about what is appropriate for development on our waterways have come a long way since this 18th century view. If Pratt and Whitney has a dirty "brownfield", I would suggest they tidy it up with CT State assistance immediately and not expect the Army to do it for them. P&W is privileged to be on a waterway, the Connecticut River, that rightfully belongs to all of us. Adding a large Army facility requiring parking for 1000 cars to our Connecticut River waterfront is in no way smart event if the buzzword brownfield is invoked.

An excellent overview and commentary! Only a few glitches, one already addressed by the previous "Doggerel", that the Pratt and Whitney site is NOT on Saybrook Road, it is somehwhere behind the BIG Gates on River Road.

(P&W! Give back River Road, our City Road! Road A, go to Hades. This was a very nice bike or long run until it was shut off! Ditto for that other part of River Road between Meadow Meat and the Rushmore Center that is always gated, but a bike or person can at least sneak by, unlike that P& W fence.)
"The sites the Army prefer are considered unsuitable by the townspeople, and then belatedly by the town planners and leaders. The sites preferred by the town planners and leaders, are considered unsuitable by the Army." Should continue ..."and also immediately by town conservationists and citizens."

"Casting Reserve to the Wind"!
Are you considering a feature film?
Hows about "Seb and Diane"?

The only question is what is the best way to protest using the Boardman Lane site. Unless there is a consensus in the city and the protest is based on principle (e.g., that the City has been burdened by too many tax-exempt facilities), I am concerned that opposition to putting a base on Boardman Lane will be dismissed by the Army as selfish, NIMBY whining. The mayor and development director could help establish a consensus by ceasing to work for a last minute reprieve to their plans to put a base in Maromas as a prelude to developing that part of the city. Bringing up River Road and Pratt Whitney (sites that have been explicitly rejected by the Army) is understandingly tempting to desperate Westfield residents. But by giving up the possibility of developing a citywide consensus, the Westfield residents could be setting themselves up for a frustrating rejection.