Reader's Theater Back in Action This Sunday 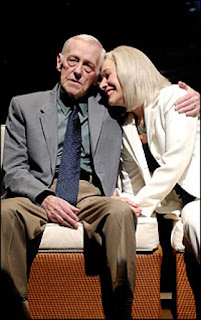 The two actors pictured on the left are acting out a scene from "Better Late" – they are, in fact, John Mahoney and Linda Kimbrough from a 2001 production of the play in Chicago, IL.  This Sunday, Readers Theater returns to the Hubbard Room of the Russell Library for a 2 p.m. reading of the Larry Gelbart play.  Gelbart, best known for his work on the "M*A*S*H" television series, originally wrote the piece in 2006 – the version you'll see and hear is the 2011 revision.  Either way, it's a comedy with dramatic overtones, about end-of-life issues, old age, love, lost love, and more.  The cast, directed by Naomi Kamins, features Pat Farrell, Henry Coe, Ben Werblow, and Richard Kamins.

The event is free and open to the public.  Doors open at approximately 1:30 p.m.

Readers Theater returns to the Hubbard Room on November 17 for a reading of "Mary Jane", a play by Amy Herzog ("4000 Miles").
Posted by Richard B. Kamins at 5:39 PM