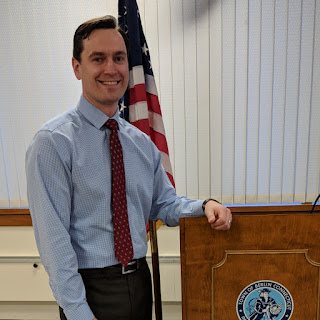 Middletown will have a new City Planner starting Monday, October 7. Director of Planning, Conservation and Development Joseph Samolis confirmed today that Marek Kozikowski has been hired. Kozikowski comes to Middletown from the Berlin Town Planner position, and his professional profile from the Berlin website reads as follows:

Marek’s story begins when, as a teen, he was hired by the Town of South Windsor Building Department as an office assistant. He worked part time after school and during school vacations for the next seven years learning the administrative functions of municipal government. Initially hired to do filing and make copies, his experience expanded to managing permit records for Phase I of the Evergreen Walk lifestyles development. Furthermore, he was part of the team of municipal officials tasked to design a program and create policies for establishing a digital archive of municipal files. Marek managed the project for scanning and creating a digital record for the building department property files.

Marek attended the University of Connecticut at the time when the State of Connecticut was investing $1 billion to update and expand the university buildings and infrastructure under the UConn 2000 program. Marek became inspired to work in planning and development as he experienced the Storrs campus change and grow around him.
Upon graduating in 2004, Marek was hired by the Midstate Regional Planning Agency (Midstate), in Middletown, CT as an Assistant Transportation Planner. Marek engaged in long range transportation planning in the region. Marek coordinated a grant application with member towns and the Middletown Area Transit to expand ADA transportation services in the region. Marek also served as the GIS coordinator for Midstate and the Towns of Durham, Haddam and Middlefield.

In 2007, Marek left central Connecticut to become a planner for the Town of Greenwich Planning & Zoning Department. Marek gained experience and expertise in a vast array of planning and zoning issues including downtown mixed use development, open space preservation, flood plain management, historic preservation and upgrading public buildings and infrastructure. Marek helped shape the administrative policies for the department, seeking efficiency in workflow and improve the quality of customer service.

In his spare time, Marek is active in the planning community serving on the planning committee for the Southern New England American Planning Association annual conference which draws up to 700 planners, engineers, architects, landscape architects, academics, students and other professionals in the development community across public and private sectors from Connecticut, Massachusetts, and Rhode Island.

Marek became a certified planner by the American Institute of Certified Planners in 2011.


Kozikowski will have a lot on his plate as he transitions from Berlin to Middletown. The update to the Plan of Conservation and Development (POCD) is well underway, the riverfront development is a top issue in the upcoming City election cycle, and the Office of Planning, Conservation and Development itself has seen much staff turnover in the last two years. Middletown's last City Planner stayed less than 6 months in the job before moving on to Farmington.
Posted by Jennifer Mahr at 12:56 PM

Let's see if we can keep this one for a while.

So is the Director a planner as well? Just curious.