The author of the post, Joe D’Ambrose, is Creative Director of Palm Tree Branding and Web Design. According to documents obtained by the authors, the Middletown firm has been paid $11,524 by the Giuliano campaign for marketing and public relations services.

When asked about the post, Giuliano denied knowing about it, saying “I haven’t a clue.” When called for comment, D’Ambrose hung up without responding.

Diana Martinez, a resident of Middletown, has never been arrested. She shares a birth year with the woman on the 2012 New Haven court docket charged with a misdemeanor. (criminal mischief is a misdemeanor).


It struck me as funny that the folks who are positioning themselves as proven effective leadership can't even do proven effective research. A simple ... check would tell you there are 19 people named Diana Martinez registered to vote in Connecticut. I share a birth year with two others so there are three of us, and there's probably countless other Diana Martinez who aren't registered to vote. And that a candidate could pay someone, have someone his campaign is paying to do his marketing, who doesn't do basic research like that is a little bit appalling. 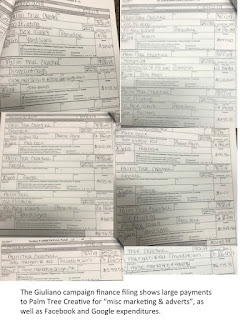 Martinez responded directly to D’Ambrose on Facebook to inform him of his mistake. D’Ambrose did not respond to her but deleted the post.

“I don’t know where Seb [Giulano] found this person, I think he should reconsider. At a minimum I thought he would reach out and say he was sorry,” Martinez said.

As of this morning, neither Seb Giuliano nor Joe D’Ambrose has apologized to Diana Martinez or the Florsheim campaign for spreading false information.
Posted by Reader Submitted at 9:25 AM