Submitted by Adam Cohen, a Middletown resident and supporter of the Ben Florsheim campaign.
----------
It was a pleasure to attend the student-led Middletown Mayoral Forum 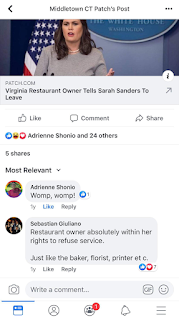 on Tuesday night at Keigwin Middle School. I am thankful for the opportunity to hear the candidates discuss their plans for our town and I am heartened to see young adults produce such a professional and substantive debate.

Toward the end of the forum, the candidates were asked about discrimination, bullying, and growing rates of suicide among our youth. Republican candidate Seb Giuliano teared up in his response, stating that no one should be made to feel excluded or ostracized for their race, creed, socio-economic status, gender, or sexual orientation.

I was surprised this comment came from Mr. Giuliano and I had planned to respond during the audience question and answer portion of the forum, but there were too many questions and not enough time for the candidates to answer all of them.

Last June and nearly a year prior to announcing his candidacy for mayor, Mr. Giuliano in a public Facebook post commented that businesses should be allowed to deny service to the LGBTQ community on the basis of being LGBTQ. He cited cases in which florists and bakers denied service to gay couples for their weddings.

I would like to share a few data points with Mr. Giuliano—
The effects of LGBTQ discrimination do not stop after high school. In the absence of federal protections, a person can be fired for being LGBTQ in 17 states and evicted in 32. This leaves LGBTQ people open to anti-gay harassment, retaliation, and other forms of abuse.

When it comes down to it, these blind spots in legal protections are not an accident. They exist because yesterday’s bullies grow up to be today’s policymakers. It is disappointing to see Mr. Giuliano feign empathy for the victims of the same damaging policies for which he advocates.

Democratic candidate Ben Florsheim and independent candidate Valeka Clarke have been outspoken regarding their support of the LGBTQ community and their plans to include queer representation in their visions of the future of Middletown. I strongly urge Mr. Giuliano to find a reason why LGBTQ community members or their loved ones should trust him to represent their best interests.
Posted by Reader Submitted at 4:00 PM