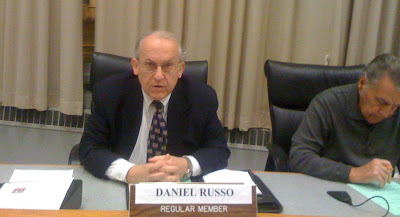 The newest member of the Planning and Zoning Commission, Daniel Russo, wasted no time before making his ambitions clear at the Commission's first meeting since the election, "I nominate myself as chair." The Commission could not agree, and the meeting ended without a chair.
As written in the bylaws, the November meeting is for the election of officers. Director of Planning Bill Warner presided over this process, and after the roll call, he recognized Commissioner Catherine Johnson. Johnson had barely started her first word when she was abruptly cut off by Russo, who asserted that, according to Roberts Rules of Order, nominations for chair should occur before any other business. Warner allowed Russo to proceed.
Russo thanked the public for electing him, and said that he had gotten multiple suggestions from the public that he should serve as chair of the Commission. After nominating himself, he expressed frustration at the partisanship on the Commission and frustration at the media, "I'm disappointed that the process has been politicized... I'm disappointed that The Middletown Eye published a list of criteria [for chairing the commission] from one member of the commission."
Russo, who is chair of the Democratic Town Committee, helped to stop an election of chair at the January 14th meeting, when he rendered the legal opinion that seated alternate members could not vote to elect officers (acting chair Pelletier refused to allow an election to proceed, following Russo's advice).
Several attempts to elect a chair last night also failed, with the 4 Democrats and the 3 Republicans each voting as a block (it takes 5 votes for the Commission to do anything). First, Les Adams ran against Russo, then Adams ran against Richard Pelletier, in each case deadlocking 3 to 4.
For vice-chair, Russo against Nicholas Fazzino, then Barbara Plum against Fazzino deadlocked. Finally, Richard Pelletier was elected as vice-chair, unanimously.
For secretary, James Fortuna against Johnson deadlocked 4 to 3.

There was then a parliamentary law squabble over whether it was possible to nominate Pelletier, the newly elected vice-chair, as a candidate for chair. The Republicans insisted that this could not be done before Pelletier submitted a written resignation to the Mayor, but since they could not find this clause in the bylaws, there was another election for chair, with the same outcome between Pelletier and Adams.
The Commission adjourned after agreeing that the election of chair and secretary would carry forward to the next meeting.
[Comment: I published excerpts from an interview with Commissioner Johnson on Thursday, I think it is important for the community to know the views and actions of elected officials and would be delighted to publish interviews with any other members of the Commission.]
Posted by Stephen H. Devoto at 5:01 AM

This is disturbing at so many levels. I don't know what is more egregious the attack by the Democratic chairman on the first ammendment rights of the press or the gross sense of entitlment that makes me wish I had voted a straight Repulican ticket.

Catherine's comments don't seem all that political, or disrespectful to me. Any typical corporate manager would be subject to a similar set of goals.

Heres my thoughts...
There are four dems and three republicans.
As we all know you need five votes.
Richard needs to call Les and see what can be worked out. The dems should have the chairmanship, they have the majority. Which would leave the V.Chair to the republicans.

And to anonymous... duhhhh have you not been watching the dems in power for the last 16- now 18 years
this is what you get voting these people back in!!!

Exactly Dem chair Rep vice chair..they should have put that in their bylaws and there would be no discussion..I dont even think the other dems know what Russo was going to do..

Not a single person in this mess was willing to cross party lines or compromise on this? Really?!? No consensus whatsoever on any of these candidates? This is some seriously messed up stuff. Shame on you guys.

It was the Repubicans who support Richie for v.chair.
The dems wont cross at all.

The Democratic Chairman should be ashamed of himself. No one likes partisan politics 1 week after an election, its disgusting - they look like a bunch of spoiled children that can't get thier own way, an embarrasment to Middletown. Elect Pelliter Chair and Fazzino V chair and move on.

Where does newbie Dan Russo come off nominating himself as Chair on his very few day...NO the very first few MINUTES of membership on P and Z? What arrogance! And now you know one reason why the Democrats are in the shambles they are in...Sad sad sad and just pathetic.

PUT NAMES IN A HAT AND DRAW ONE!

I can't believe all this bickering. Why can't people quit worrying about themselves and their affiliations and worry about the work that needs to get done for this city! I say they split the 2 chairs, give the democrats one, and the republicans the other, this way everyone is happy and we can move on to actually making this city a better place to live in!

Oh, and for someone who just got elected to nominate himself for chair.. you have to be really conceited to do that.