As you may have noticed, our national government has utterly failed to provide leadership in the face of the global climate crisis. Once we get through the Covid-19 pandemic — another area of failed leadership — we will still face this even more threatening, though slower moving, crisis. Regardless of what you hear on the evening news lately, climate change has not been put on pause. What are concerned, climate-conscious citizens to do? In addition to reducing our own carbon footprint, we need to take action at the local level.

Middletown’s Sustainability Team and Clean Energy Task Force have proposed a resolution to Mayor Florsheim and to the Common Council, declaring a climate emergency and resolving to take local action to reduce carbon emissions and to pressure state and federal leaders to face this crisis.

To illustrate the magnitude of the climate crisis, consider this. For the past 800,000 years, the concentration of atmospheric CO2 varied between 180 and 280 parts per million (ppm) as the earth’s climate fluctuated between ice ages and warm spells. In the last 170 years, since 1850, when the industrial revolution accelerated the burning of fossil fuels, atmospheric CO2 has increased from 280 to over 410 ppm. Is that serious? The last time the earth’s atmosphere had 410 ppm was in the Pliocene era, approximately 4 million years ago. In the Pliocene, sea level varied 10-25 meters higher than at present, and the coastline of Virginia was 90 miles inland from its present location. (See photo.) If we stay at 410 ppm, eventually the delayed warming will catch up to the CO2 level and the eastern seaboard of the United States will be completely underwater. (Green dots show location of shoreline in the Pliocene era.) 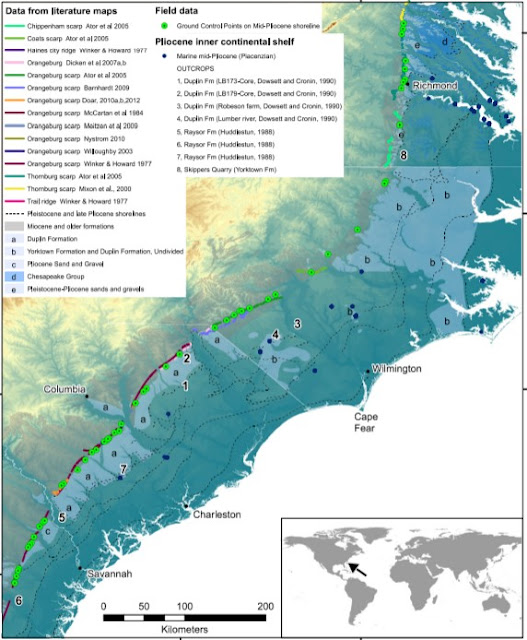 To avoid the worst climate catastrophe, we need to look beyond the pandemic and the November elections that are consuming the public’s attention. Since state and federal governments have proved themselves incapable of an adequate response, action needs to come from the grassroots and local governments. To register your support of local climate action, sign the petition which will be forwarded to city officials. You will be informed when further support for climate action is needed.


Petition Text: "In light of our national government's failure to address climate change adequately, I support the City of Middletown's Declaration of a Climate Emergency, directing our city government--both elected officials and municipal departments--to lead our community in reducing greenhouse gas emissions, and to advocate for urgent climate action at the state, federal, and international levels."

Thank you for this well-framed call to action. I urge everyone reading this article to sign the petition. It may seem quixotic, but attempts at major change always do until at last change becomes inevitable.

We do not know whether raising our voices will result in the action we need. But we do know that it will encourage others to raise their voices. And we also know that change will never come if we just wait for it.

I would rather the town council devote its energies and apparently copious free time to figuring out how to lower property taxes.

What are you proposing we do to reduce greenhouse gases?
Why do you show a map of the south instead of CT?

You make no argument for us to get involved.

The road to hell is paved with good intentions. Just ask Californians. Rolling blackouts anyone? (You think Isaias was bad? Wait till our ecowarrior politicians force Eversource to mandate solar and wind.)

Let the feds tilt at the climate windmill. The council’s time is better spent dealing with issues that are appropriate to its level of governance, like economic development, the riverfront, public safety, garbage, schools, roads, water and sewer. And high property taxes.