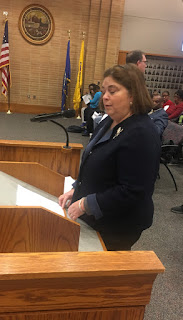 The Common Council voted to approve a new ordinance that would ban stores from offering single use plastic bags, and require them to charge ten cents to provide paper bags.

Former Mayor Maria Holzberg and the Middletown Garden Club spearheaded the initiative. She told the council that the language of the proposed ordinance "mirrors many other cities in Connecticut and across the nation."

Diane Gervais, owner of Amato's Toy Store, objected to the requirement that she would be forced to charge 10 cents for each paper bag, "A charge like this will leave the customers unhappy with me not with you."

John Hall, speaking for the Jonah Center for Earth and Art, said the charge was the best way to change habits. He called the ordinance the "Bring your own bag ordinance."

The ordinance was supported by all the Democrats except for Grady Faulkner, who abstained. Republicans Deb Kleckowski and Seb Giuliano voted against it, Phil Pessina also abstained.

So according to our mayor, plastic bags are illegal but immegrants who come here illegally can't be arrested.
What happens if an illegal immigrant has a plastic bag? Can he be arrested?

It's happening around the world. Single-use plastic bags are everyone's problem (and it's not just bags). People should put bags into their cars and bring them everywhere - not just to the grocery store! To answer your question about disposal - I think that's another big problem. From my understanding, China is no longer taking our trash. Large recycling companies are having a difficult time getting rid/selling plastics too. If I'm off base here, please chime in someone...but that's my understanding.

I argued against the .10 charge on the council floor last evening on the basis of government intrusion on businesses; by the way attached with a proposed $90. Fine. The outcome was total disregard for the removal of the .10 charge but did lower the fine to $45.00. Just wait and see what the state will charge!

Government has to stop crossing the threshold of Businesses, too much regulations with enforcement has to stop! PROTECTING OUR ENVIRONMENT IS SO IMPORTANT, but not with regulatory fees!

No plan for Public Education & Information given, but looking directly into a business threshold and denying the Merchant’s ability to use thoughtful and good marketing techiques around the importance of cleaning our environment; all of which under the threat of a monetary fine!

Well i hope they have fun picking up all the litter sure to be found around town now that people wont have disposable plastic bags in their cars to put it in until they come to trash can.

Also as i saw referenced somewhere else, are the newspapers exempt from this fee?

As Councilman Pessina said, this is a case of government overstepping their boundaries, just like they did when they told us what lightbulbs we are allowed to use.

We have managed without plastic bags for years. Bans work elsewhere, just a matter of getting used to. Plenty of people go to Aldi's and pay for bags or bring their own, and they even return their carts to get their quarter back. It's not that hard!

Plastic bags came into use when we were told that we should not use paper bags to save the trees. Now paper is ok as long as stores charge for them? Remember "Paper or plastic?"? And stop calling them "single-use". Many get a second or third use. Has the board of health weighed in on bringing reusable bags into grocery stores after they've been in trunks or back seats of cars with dogs? Yuk!

Bravo, Middletown!! This is one small, easy thing we can all do that will make a big difference. We did it with aerosols, DDT and plastic 6-pack rings - we can do this with bags. Hard to believe a seemingly small item can cause such damage. I was one of the Hurricane Katrina recovery planners to work on the Mississippi cities ravaged by the storm in 2005. Waveland was erased entirely by a 30' wave - the only things that stood after the wave receded were the live oaks and plastic bags. The image of plastic bags in trees will be seared into my memory for all time. A town can be wiped out but plastic bags survive forever.

The reason to require a charge for a bag, coming from the city, is to take the pressure off the retailers. If people know they are being treated uniformly across the city, they will understand this fee disappears when they plan ahead. I am surprised it's only 10 cents. When Dublin instituted this ban in 2008, plastic bag use within the city dropped 94% within a few weeks.

I hope the city will be sending a notice to restaurants to explain the ban - translated and with graphics. Many places, like Illeano's, provides a box when the order is large. This is one we can handle.

Ironic isnt it? Remember when they told us paper bags were bad for the environment?