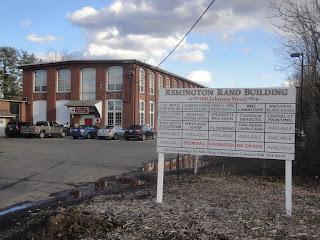 "We just want to brew some beer."

That's the message from Shane Lentini and Andrew Daigle, the men behind Stubborn Beauty Brewing Company.  And if the Common Council approves their lease, they'll be the latest tenants in the city-owned Remington Rand Building at 180 Johnson Street.

"We've been looking [for brewery space] for a year" says Lentini.  "We needed something affordable."  Both men have day jobs, but brewing is their passion, so they started Stubborn Beauty.  "This is a part-time venture on top of full-time work."

That made them a good fit for Remington Rand, which has become an incubator for local homegrown businesses.

The 1000 foot long, red brick building has a rich and colorful history.  Originally built in 1896 as a bicycle factory, the building also produced "horseless carriages".  In 1909 the company that eventually became "Remington Rand" converted it to typewriter manufacturing. The facility was one of Middletown's largest employers, enduring a violent labor strike in the 1930's.  But in the 1970's Remington Rand closed down production at the site.  Various companies attempted to use the building but nothing took hold, and 13 years ago the city took the building in tax foreclosure proceedings.

Isolated at the end of Johnson Street in the North End, contaminated with lead and asbestos, the property had become a haven for crime ranging from prostitution to illegal pit bull breeding.  "We pulled over 70 junked cars out of there" said city planner Bill Warner.


But the building found new life as a business incubator with the city as landlord.  Today the main building houses 20 different businesses ranging from asbestos removal to a coffee roaster.  Many businesses are start-ups taking advantage of the relatively cheap rent the city offers ($4/sq ft).  Businesses including flooring, carpentry, landscaping, bulk mail distribution, and fitness facilities all call the building home.  Oddfellows Playhouse rents space to store their props.  Non-profit Middletown United Fathers recently began using part of the space for meeting and planning.

Warner plans to divide some of the unused space into small offices that can be used as a true 'incubator' space, where people wanting to start a "micro-business" can begin to put their dreams together.

He is still negotiating the brownfield cleanup of the separate boiler building with Unisys, the corporate offspring of Remington Rand.  In 2009, liability for that cleanup scuttled a pending sale of the building. 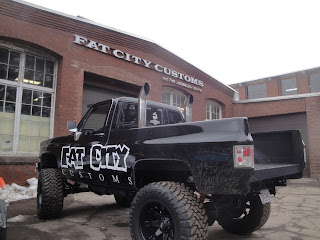 That's the opinion of Johnny Moore, the owner of Fat City Motorcycles, a six-year tenant of Remington Rand.  Moore also helps manage the property for the city.  "All the tenants know each other" he says.  "We network among ourselves, so we look out for each other."

Moore loves the building for more than just the cheap rent.  "It has great character.  There's a ton of history."  In the early 1900's, the Keating Wheel Company began making motorized bicycles -- the first motorcycles.  Now Moore is customizing motorcycles in the same building.

Warner says that's true:  the building is self-sufficient, actually generating income for the city.  "It supports most of our economic development efforts," he said.

But the building isn't without it's problems.  The original tarpaper roof is still in place on the 2-story building, and large sections of it blow up whenever there's a windstorm.  That damage has been patched, but with the first floor more than 70 per cent occupied, Warner says it's time to plan for a new roof so that the 40,000 square feet on the second floor can be rented out.

If it happens, the expansion will be a new chapter in a century-old story of Middletown business.
Posted by Bill Flood at 12:07 AM

Its the Keating Wheel Company building not the Remington Rand Building to be correct historically.
There should be a concentrated effort on getting this building on the historical building list. Not only is it one of the first examples of a factory built for "assembly line" production in the USA, but also The Keating Wheel Company factory in Middletown was one of the first electric-powered, group-drive manufacturing facilities in the United States.

Also, the buildings designer Robert M. Keating and the Keating Wheel Company need to be recognized for the many historic transportation innovations that came out of that factory. Middletown is missing out on a big part of its early history and its contributions to the transportation development in the United States. Read the history links in the original article and on the City of Middletown web page under Dept. of Planning/Middletown Initiatives and Projects.

Its the Keating Wheel Company building not the Remington Rand Building to be correct historically.
There should be a concentrated effort on getting this building on the historical building list. Not only is it one of the first examples of a factory built for "assembly line" production in the USA, but also The Keating Wheel Company factory in Middletown was one of the first electric-powered, group-drive manufacturing facilities in the United States.

Also, the buildings designer Robert M. Keating and the Keating Wheel Company need to be recognized for the many historic transportation innovations that came out of that factory. Middletown is missing out on a big part of its early history and its contributions to the transportation development in the United States. Read the history links in the original article and on the City of Middletown web page under Dept. of Planning/Middletown Initiatives and Projects.

This is very exciting. I love visiting Zen Coffee Roasters in this building, which I discovered during a Chamber Micro-Business meeting. Most people have no idea that there are businesses here; it was my first trip to this area, ever! Looking forward to the brewery.

Hi Gary
Are you related or just fooling with us. I do agree with you on name of building and have publicly stated this before, thou took no notable action to pursue the idea.

Why don't you post an article in the eye and patch or write a few letters to public officials. Maybe we can drum up more interest and get this done.

This building has a diverse group of fitness program, to fit everyone's needs.
Here's a list of the fitness businesses in the building:

My family has no direct relationship with the "Robert M. Keating" and the Keating Wheel Company, other than our last name is "Keating" My youngest brother (Brian) is a motorcycle restorer and historian and it was he who started our family interest in the history of the Keating Wheel Company. Since I live in Middletown he got me interested in this and I found the factory and did research on the Middletown history. My oldest brother (Rob) came on board a little later and since then we have a huge collection of "Keating" related items, paper, bicycles, pins, music, tools, and more. Rob is also working on getting published a complete biography on "Robert M. Keating" that he has written. I have talked with the town Planner, and other "Middletown officials" about changing the name but as you say, nothing seems to happen. We have also heard recently that there may be plans to demolish the "powerhouse" at the Keating factory. This would be a big mistake as its very important historically as it was one of the first electrical plants in the USA. I make reference to two major studies the town of Middletown has done on the Keating factory which are on the towns website. If people have any interest in saving Middletown's history, they should read these articles. After reading your post, I have talked with my brothers and we will write up an article on the history of Keating and his noted Middletown accomplishments and innovations for the press, blogs, and public officials.

Is the building name an official name? Maybe Remington Rand building is just what people call it, not an official name. So everyone can start calling it the Keating Wheel Company Building... starting... NOW. You call it that, and so will I, and eventually over time it will become known as that. looking forward to the articles.

I read a book several years ago on Marshall "Major" Taylor, an African-American cyclist considered to be the greatest cyclist in the world in the late 19th and early 20th century. It said he worked in this building when Keating Wheel rented space to another manufacturer.

"Major" Taylor came to Middletown in 1896 to work for the Worchester Bicycle Company that was also in Middletown the same time as the Keating Wheel Company. In his career Taylor set many world records in bicycle racing. Thought his career suffered greatly due to discrimination, he went on the become the 1st black international superstar. He was the 2nd black world champion in any sport in U.S. history behind George Dixon's 1891 boxing title.
The Worchester Bicycle Factory and the Keating Wheel Company would soon be going head to head in major developments the would be happening in Middletown in the Transportation field i.e., horseless carriages, cars, and "the motorcycle".
Again, this points out the great historical importance of this era in Middletown's history and development that is all but ignored and forgotten.

As for the name: that's what's on the sign out front and that's how city documents refer to it. I guess that makes it 'official'. I do know the city has preliminary plans to market it under that name.

And, I think that's because it IS what people call it. It was the Keating Wheel Company first but it was the Remington Rand building last and for a far longer period of time, so that seems to be what stuck.