The Planning and Zoning Commission considered a detailed zoning code change to regulate the locations where medical marijuana could be sold in the city. A previous proposal for a sweeping prohibition of any marijuana distribution in the City received only 3 out of 7 'aye' votes. The revised and more specific proposal tonight received 4 'aye' votes, but failed because 5 votes are needed for any Commission action.
The Commissioners were split over whether there should be any zoning code regulating a substance which is currently illegal in the state, and if so how restrictive the regulations should be. Alternate Commissioner Ken McClellan argued that any zoning code on medical marijuana was inappropriate, "I don't want the city of Middletown endorsing the use of marijuana. ... It's a mood-altering substance." Commissioner Nick Fazzino agreed, and Commissioners Catherine Johnson and Barbara Plum joined Fazzino in opposition. Plum preferred an outright ban, and agreed with Johnson that any zoning code changes should be carefully studied. 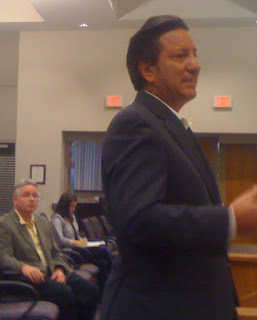 A New Joint on Court
The Commission unanimously approved an application to open a new restaurant and lounge on Court Street, to be named the Mezzo Grille. This venture will be at the site of the now closed Fishbone Café. The grille and bar will have "Industrial/Metro décor, American Eclectic Fusion Cuisine, and Mixologist style bar service, 40 bottle wine list, 14 draft beers." The upstairs night club venue will feature affordable entertainment such as small bands and comedy.
Steve Till, who will operate the restaurant, said Mezzo Grille will be "A real iconic restaurant for Middletown."
Posted by Stephen H. Devoto at 5:00 AM

When there are pot stores on Main Street and potheads coming from all over CT to buy and the polic over burden with quality of life calls and the resturants complaining that people with income are going elsewhere, you know exactly who to blame, the elected Middletown PZ. Theses people dont get it and dont understand their constituents. The most educated member, C Johnson has wreaked havoc and destroyed the Commission commen sence approach. PZ is the joke Commission of the entire town. Thank god there is nothing important for them to decide on.

How can you create an ordinance for a substance that is still(unfortunately) illegal?
While many people classify marijuana as a "mind altering" substance, it is FAR less dangerous
than the perscription medications being shoved down our throats by Corporate America. Pots' benifits FAR outweigh the risks. when it is legalized, maybe the way to regulate it would be to ask the people who actually know about it.
I would be glad to help.Myths and misconceptions that people have been wrongfully taught should be the first topic addressed. It is NOT the first "gateway" drug..Try Alcohol, cigarettes, and yes, caffeine.Most kids that try pot and don't like it, have no problem saying no,as side effects MAY include paranoia, and panic attacks.
For many, however, it releives pain and nausea,reduces,stress,and induces appetites for people going through chemotherapy.It IS safer than the drugs being peddled by Drs. today.
When the time comes for an ordinance, hopefully it doesn't get all messed up by beaucracy.. but I'm not very optimistic..

Anonymous 7:41, I wonder if you understand "hoist with his own petard?"

If Catherine Johnson has "wreaked havoc" (properly used, congratulations) by destroying a "commen sence approach," on the P&Z then I imagine "commen sence" means advocating asphalt parking lots next to banks on Main Street, and drive-in pharmacies on every other corner, the destruction of historical buildings for strip-mall architecture and auto-centric development.

I guess I'd have to advocate for the destruction of that kind of "commen sence" as well.

As for marijuana, if we're really concerned about "mood-altering substances," (and I don't hear anyone advocating medicinal crack), I think we ought to shutter the liquor stores on Main Street too. There are 75,000 deaths in the US each year directly tied to alcohol abuse. Cheers.

Interestingly, while marijuana boasts proven medical benefits, alcohol (except as a cleaning agent) does not.

In ten years marijuana will be legal in most states and we will all look back and laugh at our fears about "reefer madness."

What about Middletown's potHOLES? The P&Z should have the good scents to create an ordinance against all of them, past, present and future. Who needs 'em ?!

Who is editing the editor of the Eye, Ed? A "New Joint on Court", hard-ee har har! The previous joint went up in smoke pretty fast. The only scentsable advise to the brave new venture is, "Don't bogart that joint my friend..."

7:41 wins the "posting under the influence" award.

To the person who is worried about pot stores on Main Street and all the potheads from all over CT to buy the stuff. Well for as long as I can remember this town has some of the worst drug addicts being dumped on our Main Street and other streets from other towns that do not want to be bothered by there problem people from all the suburbs around Middletown. They are alcoholics, and Crack and Heroine users, who are more than likely to steal kill and destroy there way through town to get money for their next fix.
The other towns do this because they figure these crazed people will be sent to CVH or Middlesex Hospital which they end up at, but when they are released they tend to stay in Middletown on Main Street. Why haven't you all been concerned about that all these years?
Marijuana may make you a little stupid, but it doesn't make you a crazed paranoid schizophrenic, destroy your pancreas or your liver or make you go through the withdrawals that can last a long time and do havoc on the body.
Get educated before you open your mouths. Go visit hospitals and watch people withdraw from alcohol and drugs that devastate the body.
Tylenol is more dangerous than Marijuana cause you can OD on it. I have never heard of anyone smoking themselves to death with pot.

Thank you for your interest in this topic, which is new to the commission, and new to 49 states in the US. Because there is not a lot of information available to us from which to create a new ordinance that will both protect ourselves where we seek protection and permit sales to people who need the item, we are going to stumble a lot until we get more input. If you heard the hour-long discussion and looked at the map last night, it is a complicated topic.

Second, I am not the author of the ordinance, I was asked to support it or reject it as written. I will not support a poorly written ordinance and evidently last night neither would 2 other commissioners.

Third, the substance is not legal in CT, so we are not under threat of any type of dispensary at this time.

It sounds like you might want to assist the commission and planning office in pulling together a new ordinance. Would you please call the P&Z office (860) 344-3425 with your contact info so you can be there when the next version is created? It would be nice to have you in the room pointing out potential pitfalls, the way Councilman Bauer did last night so effectively.

If you want to hear last night's discussion in its entirety you can take out the DVD from the Reference Desk at the Russell Library (860) 347-2528.

I propose a new self-help group called Eye-anon...dedicated to exposing the non-evils of pot smoking in newsblogs!

Eye-anon - for those addicted to posting anonymously on The Eye and other blogs?