Public Split on The Public 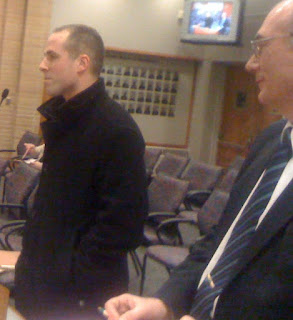 The Planning and Zoning Commission voted to continue the public hearing on an application by The Public nightclub until after they could hear from the Police and Fire Departments about the nightclub's application to expand their facility.

Retroactive Approval Sought
Planning and Zoning granted approval in 2006 for a 1632 square feet nightclub. Last year, without prior P&Z approval or even a building permit, the owner of Public, Tyler DeVecchis, expanded the facility by about 1000 square feet. Represented by attorney Ralph Wilson, DeVecchis was before the Commission to apply for a special exception permit to do this work.

City Planner Bill Warner had recommended that the Commission deny this application, largely on issues of public safety. Wilson attempted to address Warner's concerns, claiming that not all of the police calls to The Public address were related to the nightclub, and pointing to new procedures in place at The Public to increase safety. These new procedures include meeting a mandate from the State Liquor Control Board to hire two police officers for weekend nights, and to use a metal detector at the entrance.

Wilson was open about DeVecchis' motivation, "[this] expansion is being requested for economic reasons... This business needs to expand to stay open." He said the business employs 20 people, "mostly from Middletown," and that the owner has a substantial investment in the building.

Public Comments
Real estate agent Nancy Newman expressed strong support for The Public, saying that she had on separate occasions taken her 22-year old son and her nearly 70 year old mother, "It's a fun place people enjoy going out to." Dan Litwin, owner of Young's Printing, which is immediately around the corner from The Public, said it was important to support downtown businesses and that a large storefront vacancy on that block would be detrimental. 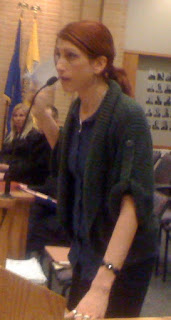 Seven customers and workers associated with the nightclub also testified in favor of granting the permit for an expansion. Amora Corvo said that the youth of Middletown need a venue for music, and scoffed at the offerings supported by the Commission on the Arts. She said of The Public, "This is a good business, this is a beautiful business."

Marie Kalita-Leary, director of the Downtown Business District, expressed concern over not only the repeated police calls, but also the lack of even minimal cleaning up in front of the bar. She said that the executive committee of the Business District, representing 243 businesses, voted unanimously to support Warner's recommendation that the application be denied.

Mayor Sebastian Giuliano forcefully urged the commissioners to deny the application, pointing to the repeated violations and the lack of accountability of the owner. He expressed fears about possible crime associated with patrons of the Public, and how that might jeopardize the Main Street revitalization that has occurred in the past decade, "This is a ticking time bomb. ... we are one incident away from being back in the 1980s."

Planning and Zoning Commissioners Deliberate
Commissioner Fazzino asked DeVecchis about the nature of the music at the Public, and in particular how much hip hop music was being played. Fazzino seemed to be concerned about what kind of clientele might be attracted by hip hop. Chairman Phipps reassured him, "The only thing an iPod full of hip hop will do is make you chair of Planning and Zoning."

The Commission voted unanimously to postpone a decision on The Public until after hearing about public safety issues from the police and fire department. Mayor Giuliano assured the commissioners he would request their presence at the next Commission meeting.
Posted by Stephen H. Devoto at 12:04 AM

What kind of clients are attracted by hip hop music??? I think you should look into the what kind of clients are attracted to the owner of Public. This isn't about hip hop this is about some kid who had enough money to convince people to allow him open up a business in Middletown. It's obvious to me from my few attempts to support it that not only does the food (when they have some) suck, but the owner is clearly not equipped with the tools to be a successful restaurateur. In my opinion, bad character+ bad food+ bad energy= bad business.

I am a huge fan of hip hop music.

It is unfortunate that we still have individuals generalizing upon a genre of music ultimately definitive for modern generations. Hip-Hop is not to be a scapegoat for ignorance nor is it even necessary for the argument at hand. Zoning and liability of the "Public" night club can be a "ticking time bomb", says Mayor Giuliano, but not the clientele or atmosphere within.
Comm. Fazzino says there may be "too much hip-hop" for Main Street or Middletown in general, well, I say let's amplify his play list and see the response. I'm sure within hours of blasting Paul Anka or Engelbert Humperdinck riots shall ensue and this whole mess about finding space for an interesting, much needed local business will be forgotten.