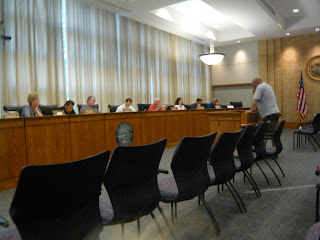 Charles Marano may have experienced some temporary frustration as Planning and Zoning commissioners advised him that the chain link fence he planned to build to surround a parking lot for his towing business would have to be two feet taller than the six footer he proposed, but it was only the beginning of another excruciatingly frustrating meeting of the commission.

Marano, who owns Untouchable Towing, was told that because his fence would be topped with barbed wire, that it needed to be at least eight feet tall, and that in the first year, the fence, and lot for his towed cars would be inspected monthly by the Zoning Enforcement Officer. Under those conditions, his plan for the lot were passed, and he left satisfied, but not until he shared his frustration with the monthly inspections.

Marano expressed that his operation was the tidiest in the Johnson Street/North Main Street neighborhood, and that if he was going to be inspected, some of his neighbors should feel the pressure too.

"There's a lot of people up there who make the neighborhood look like crap," he confided to the commissioners, who were deferential to his frustration.

One frustration led to another as the commission failed once again to elect a chair in a four to three vote in which commissioner Kleckowski bested commissioner Pelletier again, but failed to get the five votes needed to be chair.

The report of the Zoning Enforcement Officer, Bruce Driska, was a breath of fresh air, as he explained how a number of boards and enforcement entities in town worked together to put pressure on addresses where drug activity has been prosecuted.

Then the trouble began. As the commission began to discuss the long-time-coming revision of by-laws, commissioner Ron Borelli objected to a series of by-law documents he had received, each purporting to be "final amendments." Borelli recommended at the beginning of deliberations that the discussion be tabled until an agreed-upon document could be read by all commissioners.

Assured that a document passed out just before the meeting was the real thing, the commission began to deliberate. After moving through two sections of the document, it became clear that not all commissioners were working from the same set of changes, and that, in fact, the document they were working from was "illegal" because it contained unapproved amendments.

In the fine tradition of Dicken's Jarndyce vs. Jarndyce (a legendary legal case in Bleak House which goes on for decades), the next hour was spent deliberating how to handle the "illegal" document. Some suggested accepting the document so it could be amended. Some suggested amending the document so it could be accepted. Some suggested rejecting the document. A series of false-start motions, and votes that turned out to be non-votes spoke as much to vice-chair Richard Pelletiers inability to control a meeting that had turned into a juggernaut, as it did to a commission whose by-laws are not helpful in adopting new by-laws.

I took a few minutes of video but, believe me, you don't want to see them.

At one point the normally taciturn commission secretary James Fortuna had had enough.

"You guys are killing me," he blurted. "I can't believe what's going on. Fourteen years we've had these by-laws, and they want to change it. And they don't know how to change it."

In the end, the commission voted to accept the "illegal" document as an amended document that would be notated and dated and redistributed to commission members to be addressed at the next commission meeting.

The by-laws debate was followed by yet another procedural debate on a proposed survey about conservation and development that commissioner Catherine Johnson wished to distribute to the public for input on the plan of development.

Kleckowski suggested that the proposed plan of development had been out in the public for months and that "we can't keep going around in circles. We need to move ahead."

Johnson agreed to consider the comments of the commissioners and open discussion of the survey at the next meeting after she fielded objections from the city planner.
Posted by Middletown Eye (Ed McKeon) at 12:25 AM

Email ThisBlogThis!Share to TwitterShare to FacebookShare to Pinterest
Labels: by laws, plan of development and conservation, planning and zoning commission

I know it must be both difficult and boring to sit through these meetings. Thank you for bringing this information to the public.

I'm glad my life doesn't depend on these people!