The Simplest Tool for Improving Cities
Is Also Free

July 16, 2021
By Sara Hendren
___________________
https://www.nytimes.com/2021/07/16/opinion/cities-reopening-time.html
CAMBRIDGE, Mass. — For decades, a stretch of Memorial Drive here that runs along the Charles River has been closed to automobiles on Sundays for the warmer half of the year. In the absence of cars on a four-lane thoroughfare beside the water, all kinds of other street uses blossom: skateboards, bicycles, hoverboards, strollers, wheelchairs and walkers, people on feet and on wheels now moving slowly enough to witness the late spring goslings, the ever-present sea gulls or the rarer magic and grace of a heron feeding along the water’s edge. A towering line of stately, centenarian sycamores forms an unbroken canopy over several blocks. 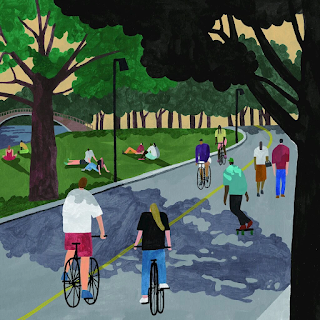