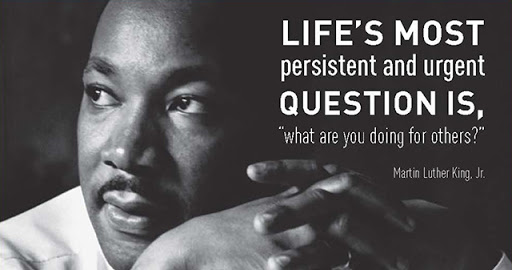 Who was the Reverend Dr. Martin Luther King, Jr. and Why do we honor him with a national holiday?  Dr. King was a civil rights leader who championed equal rights for all and that “All men are created equal,” according to the article “Martin Luther King, Jr. Day” from the Department of Defense Education Activity(https://www.dodea.edu/dodeaCelebrates/MLK.cfm) website.  He began his quest for civil rights in 1955 with the Montgomery Bus Boycott and continued his path for social justice during the turbulent 1960’s until he was assassinated in 1968 according to the article “Martin Luther King, Jr.” from U.S. History.org.

Two words that could describe who Dr. King was “equality and nonviolence” according to U.S. History.org.  Why?  He was a proponent of nonviolent means to overcome the racial discrimination and injustices of the time.  Dr. King “created change with organized Sit-ins, marches, and peaceful demonstrations that highlighted issues of inequality,” according to the “Martin Luther King, Jr. Day” article from the Dodea.edu website.

Dr. King created the Southern Christian Leadership Conference whose purpose was the “advancement of rights for African Americans,” from U.S. History.org.  In April 1963 he planned a protest in Birmingham, Alabama because according to Dr. King this was “the most thoroughly segregated city in the United States" during this time period. He organized peaceful protests against the racial injustices there.  Dr. King was jailed numerous times in Birmingham for his peaceful protests against the racial discrimination towards African Americans according to History.com

On August 28, 1963 the Reverend Dr. King organized the “March on Washington” which ended at the Lincoln Memorial.  The goal of this march was for “Jobs and Freedom… to shed light on the injustices African Americans continued to face across the country according to the History.com website article “Martin Luther King Jr.”  This peaceful demonstration attracted approximately 200,000-300,000 people and is considered a milestone in the “American civil rights movement and a factor in the passage of the Civil Rights Act of 1964,” according to the same article. Also, the passage of the Voting Rights Act of 1965.  The March on Washington was where Dr. King delivered his famous “I Have A Dream Speech.”  In 1964, he received the Nobel Peace Prize for his work on combatting racial discrimination and was the youngest person ever to receive this award according the Dodea.edu website article “Martin Luther King, Jr. Day.”

In 1983 President Ronald Reagan signed legislation creating a U.S. federal holiday in honor of Dr. King.  It was first celebrated in 1986 and it is observed on the third Monday of January annually according to History.com’s article “Martin Luther King, Jr.”

In Middletown, the Middletown Scholarship Committee of Greater Middletown will be presenting the 28th Annual Dr. Martin Luther King, Jr. Birthday Celebration on Monday, January 18th beginning at 12:30 p.m. with a virtual service on zoom.  The Meeting ID is 92853898676 and the passcode is mlk2021. The keynote speaker will be the Connecticut Commissioner of the Department of Children & Families Vannessa Dorantes, LMSW.

Due to the COVID-19 Pandemic there will not be a march in Middletown on January 18th according to organizer Brittany Hardy.  She went onto say that “This program is our key fundraiser in honoring Dr. King's dream for equality and his stance on education. It also allows us to provide continued financial support to high school graduates continuing on to a higher education.” Donations to the scholarship fund can be mailed to P.O. Box 282, Middletown, CT 06457.  If you have any questions about the virtual service or the scholarship fund, please send your queries to mlkscholarship@yahoo.com 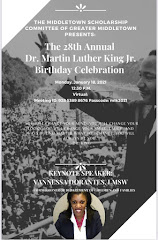 Posted by Frank LoGiudice at 11:40 AM