The first Earth Day was April 22, 1970.  I was a seventh-grader, and there was a huge buzz around the impending event.  Programming at the school was organized around the event.  A favorite teacher gave me a challenging book to read.  Teach-ins were planned and held.  According to an estimate on the EPA website, some twenty million Americans participated in peaceful public demands for attention to the environment on that day -- in 1970, that was ten percent of all Americans.  Media coverage reached many more.

Earth day was a high-water mark in civic engagement around environmental issues, and action followed.  Later in 1970, the EPA was created.  The Clean Water Act, passed in 1972, led to improvements in water quality that we continue to enjoy to this day.

Earth Day and the events surrounding it have continued to be a focal point of environmental concern and activism.  The scale of participation has increased worldwide but declined domestically  Today, it would take demonstrations involving thirty-four million Americans to match the scale of the first event.  But this year, there will be close to none: a global pandemic has shut down most public gatherings.

You can still be involved, and there are many things going on.   Wesleyan University's Sustainability Office has created a calendar of Earth Week events for you to use.  Wesleyan student Maggie O'Hanlon has prepared another list of events that you may find useful.  And Connecticut's Sena Wazer, the fifteen-year-old activist prodigy who is a first-year student at UConn, is promoting a "Climate Strike" on Friday that you can attend from your personal computer (sign up in advance).

Neither our current distraction by the epidemic, nor the attenuated nature of the fiftieth anniversary of the first Earth Day will reduce the need for a flood of activism in the face of the climate crisis.  Along with encouraging you to participate in the events linked above, I invite you to join me for an examination of crises and the way we deal with them.  I will give a talk entitled "Bending the Curves: Coping with Crises from Car Crashes to Coronavirus to Climate Change" on Earth Day at 8:30 p.m. and on the following day at noon.  Join via facebook by navigating to the Radical Sustainability facebook page, or use the event name: Bending the Curves. 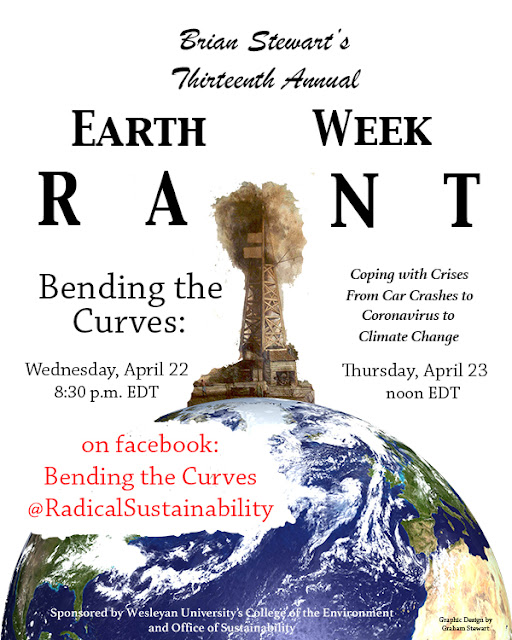