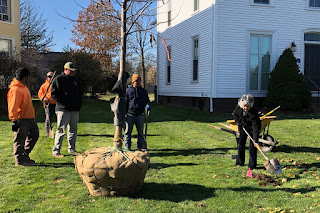 The City of Middletown has been losing trees at a rate of approximately 100 per year. The city’s current budget for tree planting is $8500 per year. To address this alarming situation, the Jonah Center and the Urban Forestry Commission are collaborating on a campaign to increase the city's tree-planting budget by $50,000, to a total of $58,500.
In the course of this campaign, some people told us they want to donate their own money to plant trees. That's commitment!  While figuring out how to receive those donations, we heard about Sustainable CT'sprogram to match dollar for dollar all community-generated funds for qualified projects through IOBY (In Our Back Yards) – a crowdfunding service. So, your $20 gift will instantly become a $40 gift.
Sites for new trees are being considered, with priority given to Middletown's North End, where the tree canopy is less than in other parts of the city, and to high visibility commercial corridors. Donations from Portland residents will be used to plant trees in Portland.
Click here to read more or donate.