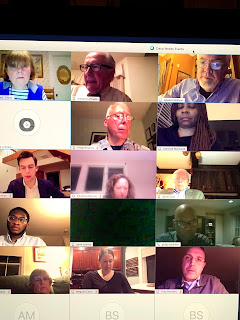 The Common Council held its first virtual meeting last night, carrying out its usual business if not as
usual, certainly far better than one might have expected given complete social distancing between council members, the mayor, city staff, and the public. The meeting was relatively smooth, with most council members visible and audible for the entire meeting. Two dozen members of the public were in attendance, 3 spoke during the public hearing.
The internet feed dropped out once, in the middle of Mayor Ben Florsheim's explanation of his efforts with the State Department of Transportation. But the feed returned after only a few minutes.

The Council was unanimous in its support for a resolution calling on the Department of Transportation to immediately suspend work on the St. John's Square Project until the state meets with a Committee of City of Middletown leaders, provides results of traffic and pedestrian studies, and considers alternatives to the changes as currently proposed. Councilman Ed Ford asked Mayor Florsheim whether the state delegation was involved in the project. Mayor Florsheim responded that the delegation was aware of the issues, but was more involved in the overall aspects of the Route 9 project and the funding of projects. He said he was coordinating with the city's delegation on this project.

The Council voted, unanimously, to postpone its decision on raising the fees to use picnic areas in city parks. Councilman Gene Nocera, who was one of the sponsors of the ordinance change, moved to table the consideration in light of the economic situation, "I don't think that we should be entertaining this any further until we deal with our economic base."

The Council also voted, unanimously, to allow residents to defer the payment of city property taxes for 90 days. Instead of being due on July 1st, they will be due on October 1st. This also applies to Water and Sewer bills, and municipal district trash bills. Councilman Grady Faulkner asked whether passage of this measure would have an impact on whether the city would still have enough cash flow to continue to pay employees. Florsheim indicated that the Finance Department had indicated that this was true.

This is what he attempts to do in Executive order 7b.

And in every one that I observed, the members of the agency holding a meeting via phone do not ID themselves with every-time that they speak and in some, a member admitted that he was texting another member-the contents of the texting unknown to the public - of which occurred at the meeting.

These telephonic meetings either a) violate our common law rights or b) open up all the places where the members of an agency are attending via telephonic/video are participating, even their private homes.

Most of the executive orders, and i encourage folks to read them all, are knee jerk reactions to calls to the governor ~ he has thought none of these himself. And most are void on the face being attacks upon our rights, constitutions, and/or common law rights.

It is now, more than ever that we defend our rights that so many have died for.

Our founding fathers never texted or had video meetings!