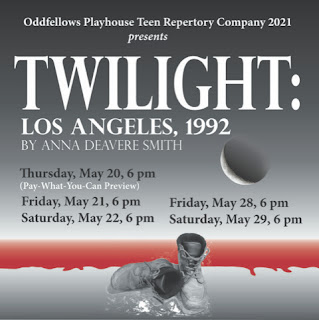 Oddfellows Playhouse is bringing in-person theater back to central Connecticut! Get tickets here.

Twilight is a powerful piece of documentary theater exploring the riots following the acquittal of the police officers charged in the beating of Rodney King. Originally performed as a one-woman show by author Deavere-Smith, the play features over 20 characters representing many perspectives on the incident - including Rodney King’s aunt, Korean grocery store owners, LA Police Chief Daryl Gates, gang members, Congresswoman Maxine Waters, truck driver Reginald Denny, the leader of the Black Panther Party, and others. The play remains relevant today -- the two weekend run will coincide with the one year anniversary of the death of George Floyd in Minneapolis.

Oddfellows Executive Artistic Director Dic Wheeler, who is directing the production, says “This has been an amazing piece to work on right now, especially with our very diverse cast and production team. Watching the trial of Derek Chauvin unfold while immersing ourselves in the story of Rodney King has been powerful and painful for everyone; we’re all in the journey, and we’re aiming to bring ourselves and the audience to a place of Hope and Justice at this moment in history”.

Tickets for this production are $15 for adults and $8 for students. “Big Heart” tickets for $25 are available for anyone wanting to support Oddfellows’ work with young people, the arts and social justice.

Get your tickets today!

***The production contains mature material and strong language and is not recommended for small children.

Posted by Oddfellows Playhouse at 4:09 PM