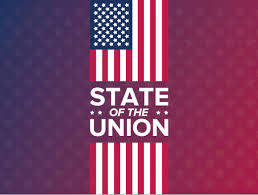 PRESIDENT JOSEPH R. BIDEN TO DELIVER SPEECH BEFORE A JOINT SESSION OF CONGRESS ON WEDNESDAY, APRIL 28, 2021 AT 9 P.M.

According to Article II Section 3 of the United States Constitution regarding the executive branch and the duties of the President it states, "He shall from time to time give to the Congress Information of the State of the Union, and recommend to their Consideration such Measures as he shall judge necessary and expedient...."

President Joe Biden accepted U.S. House Speaker Nancy Pelosi's invitation to speak before a joint session of Congress on April 28th. According to CBS News the President’s first joint meeting before Congress is "...not an official State of the Union….” The President's first speech before Congress is an opportunity for new presidents to lay out their goals of their new administration and the country according to CBS News.  President Biden’s first speech before Congress comes two days before the end of his first 100 days in office.

President Joseph R. Biden’s speech will be broadcast on most of the four major commercial television networks, Public Broadcasting & C-SPAN along with the various cable news channels plus radio stations and YouTube. President Biden's speech will air at 9 p.m. according to CPTV.org & PBS.org

South Carolina Senator Tim Scott will deliver the GOP's rebuttal to President Biden's State of the Union speech next Wednesday.

For more information about the State of the Union speech please see the following websites:

Posted by Frank LoGiudice at 11:03 PM