The original work of three local young playwrights will be showcased at Oddfellows' New Plays Festival on Saturday, February 22 at 7 pm. The event will be held at Oddfellows Playhouse, 128 Washington Street in Middletown, and is free and open to the public.
The Festival is the culmination of a seven week "Writing Plays" class taught by nationally-produced playwright Kristen Palmer. The festival will feature two new plays by Ash Taber, age 20, of Durham -- Lost, and Just Another Fairy, both directed by Peter Loffredo.  Rebecca Kutcher, 17, of Middletown, has written Cut the Headlights, which will be directed by Jeanie Kanaley. The final play of the evening is Romeo and Juliet, written by Zoe Geyser, 14, of Durham, and directed by Marcella Trowbridge.
The 13 actors performing in the plays represent a mix of adults, college students and teenagers from around central Connecticut.
All are invited to share this evening of exciting new work by local young writers.
For more information, email info@oddfellows.org or call (860) 347-6143, 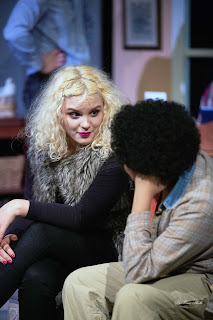