Artifishal will be the next film in The Elements: An Annual Environmental Film Series. The film will be shown on Monday, February 3, 2020 at 7pm, at the Wesleyan University Center for the Arts Ring Family Performing Arts Hall, 271 Washington Terrace, Middletown, CT (next to the Zilkha Gallery).  As always, the film is open to the public and free of charge.
Artifishal is about people, rivers, and the fight for the future of wild fish and the environment that supports them.  It explores wild salmon’s slide toward extinction, threats posed by fish hatcheries and fish farms, and our continued loss of faith in nature (www.patagonia.com/artifishal.html)  Following the film, we welcome you to stay for an informal discussion.
We hope you can join us for our third film of the 2019-2020 season, as well as our final film in April (see below).  Please phone the Conservation District office for more information at 860-346-3282. 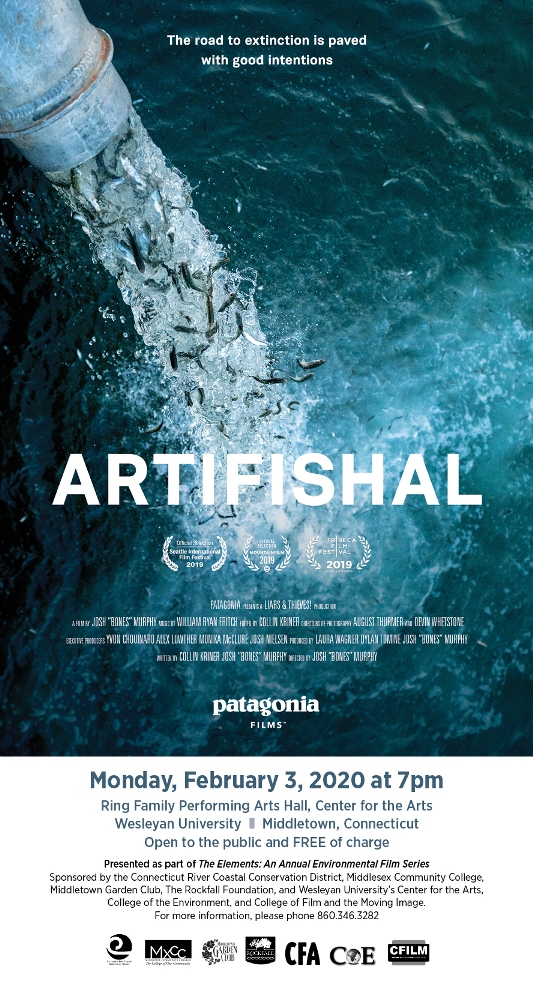 A Concerned Citizen: Civics in Action, April 6, 2020, Middlesex Community College, Chapman Hall, highlights the work of Dr. Riki Ott, a citizen activist who came to the aid of her Alaskan community after the Exxon Valdez oil spill in their battle to get fair compensation for their loss of health and income, and has been organizing the Gulf coast communities as they recover from the BP Deepwater Horizon disaster. Taking her lessons learned as an activist, she is spearheading a campaign called Ultimate Civics, a civics curriculum that empowers students to participate in their democracy. (www.bullfrogfilms.com/catalog/ccit.html)
The Elements: An Annual Environmental Film Series is co-sponsored by the Connecticut River Coastal Conservation District, Middlesex Community College, Middletown Garden Club, The Rockfall Foundation, and Wesleyan University's Center for the Arts, College of the Environment, and College of Film and the Moving Image.
Posted by Jane Brawerman at 5:35 PM