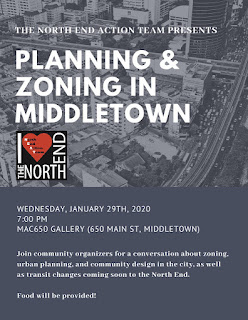 Submitted by Emily McEvoy
--------------
On Wednesday, January 29th, the North End Action Team (N.E.A.T.) will be holding a community meeting to discuss planning and zoning and community design in Middletown.

At Mayor Ben Florsheim’s town hall meeting on December 7th, 2019, issues raised included pedestrian safety in the city’s downtown area, garbage bin and recycling access, and the locations of various social services in the city, including St. Vincent De Paul’s soup kitchen. Many of these issues, which lie at the intersection of sustainable city planning and support for vulnerable communities in the city, are inherently connected to issues of urban and community design, which sparked interest in the topic for the community meeting.

The community meeting’s mission is to involve North End residents in particular in conversations about the city of Middletown’s updated Plan of Conservation and Development (POCD) for 2020. Items in the POCD that effect the North End, including the downtown trolley proposal and the redevelopment of Route 9 and the riverfront, will be discussed.

Commenting on the larger goals of the city, Mayor Ben Florsheim has said that we must “[make] sure we have an economic development plan that serves the North End — not at the expense of North End residents.” NEAT intends for the community meeting to work towards this goal.

The community meeting’s agenda is being created in collaboration with Shanay Fulton, Planning and Zoning Committee Alternate and N.E.A.T community organizing veteran; Marek Kozikowski, Middletown City Planner; the Complete Streets Committee; Jeff Hush, President of the Middletown Green Community Center; and Kim O’Rourke, Middletown Recycling Coordinator. However, we are welcoming all conversation starters, and topics related to planning and zoning and community design in the city!

The meeting will be held at 7:00 PM at the Mac650 Gallery & Artist Co-op, 650 Main Street. Refreshments and childcare will be provided. We hope to see you there! RSVP here on Facebook.
Posted by Stephen H. Devoto at 1:05 PM