The 100th Annual Durham Fair did not disappoint today: the weather was gorgeous, the exhibits were lively, the pumpkins were HUGE, the deep fried oreos were perfectly gooey, the mosquitoes stayed away, and a small act of kindness had a big impact on two young Middletown residents.

Did you ever wonder who actually wins the huge stuffed animals at a fair? For Old Lyme HS sophomores Emily Mesham, Caroline Crolius, Victoria Gage, Dylan Avelange, and Nick Adeletti, the answer tonight was their friend, Patrick Flanagan (wearing glasses and a beige sweatshirt in the photo). Middletown residents Sebastian Bartolotta and Anthony Mahr happened to be walking by right as the friends were celebrating Flanagan's big win.

Flanagan offered to try to win the young boys their own giant stuffed sloth, but was unable to repeat his stunning balloon-popping performance. So, he offered up his own prize as compensation. "I'm not so sure I want to carry it around all night anyway," Flanagan said. Mary Bartolotta, Sebastian's mom, praised the teens for going out of their way to show kindness to a young stranger. "They didn't have to give up their prize, and I am so impressed that they took time out of their evening to include a young boy they didn't even know." 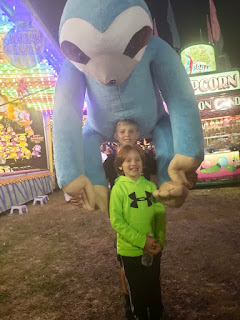 Getting the gift into Bartolotta's car was a different problem altogether. The sloth was too big for the front seat, and ended up getting shoved through the trunk and into the back seat. This highly amusing process happened in front of the buses loading up to return fair attendees to distant parking lots, so several people got a little extra show at the end of their night. 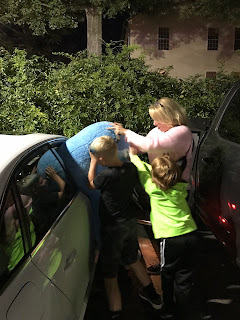 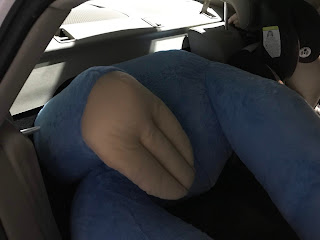 Two other Middletown residents were spotted in the poultry exhibit. Stephen Devoto and his wife, Joyce Powzyk, brought two turkeys and two peacocks from their farm on Country Club Road. The couple is raising 29 turkeys this year as part of a long-running Thanksgiving Turkey co-op. 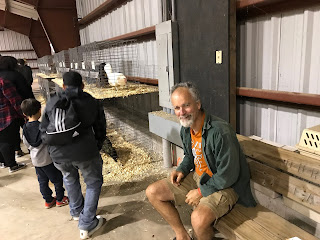 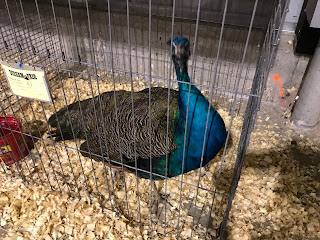 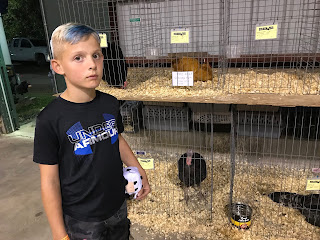 The weather will continue to cooperate for the rest of the 100th Annual Durham Fair. Sunday is Military Appreciation Day, and all US Active Military and US Veterans will receive free admission with a military ID or VA ID. Other acceptable forms of ID for Veterans are a copy of a DD214 or proof of membership to any Veterans organization. A number of participating vendors will offer special promotions to veterans on Sunday: the full list of vendors and offers is here.