On the first relatively warm rainy night in spring after the snow has melted, the creatures begin stirring. Wood frogs and spring peepers set up a raucous commotion that tells all in the know that spring is here for sure. If you stand by a vernal pool without moving, but with a flashlight shining at the ground, you may see a slow-moving parade of salamanders and frogs heading for their version of a wild beach vacation. For a decade or more salamanders less than six inches long may travel several hundred feet to get to the wetland of their birth, counting on that successful pool to raise their own young. They sometimes even have to risk their lives crossing roads!

Vernal pools are also known as ephemeral wetlands. They appear in late winter and spring and most do not persist into the hotter, drier times of summer. All of them are found in dips in the land and most are found in wooded areas. They are fairly shallow and usually quite small with no permanent water flowing into them, aside from spring rains and melting snow. Because there are no fish, these pools form an ideal location for the successful development of amphibian eggs and certain invertebrates adapted to this ephemeral habitat.

Most vernal pools are isolated, occurring in shallow depressions. They may be found in hilly wooded areas or in low-lying areas near streams, but not connected to them. The old livestock pond at the Guida Conservation Area is teeming with salamanders, newts, and several frog species.

Spotted salamanders are the most common and are about 6-8” long. They spend most of the year in underground tunnels in the woods feasting on snails, worms, insects, and other invertebrates. This means that they are seldom seen for most of the year, but their distinctive yellow spots make them visible in the shallow pools where they meet to find their mates and lay their eggs. The egg masses are often attached to vegetation. During the water stage, spotted salamanders have gills, but their lungs mature in August they can move out into the surrounding woodlands. Finding a vernal pool that will remain sufficiently deep for five months of the year is critical to the survival of the species.

Newts are much smaller than spotted salamanders, being only about 4-5 inches long. They have a more complicated relationship with the habitat because they have three dramatically different phases of their lives. Like spotted salamanders, they lay their eggs in water and the young cannot leave until their lungs develop three months later. However, when they leave, they have a dramatic red coloring with spots and are called “red efts”. They live in forested areas for several years until they are fully mature. Then they return to the water and live their adult lives as aquatic creatures, turning a protective olive-green color, but retaining their red spots.

If you think you hear a duck quacking in the middle of the woods, you have probably been fooled by a wood frog, calling for a mate. Wood frogs go from egg to tadpole to mature frog in just four months; the cycle must be completed before the pool dries up. This brown frog with a white belly is common in vernal pools, but spends its adult life in the leaf litter of surrounding woodlands. This species makes its own “antifreeze” by increasing their glucose levels in the winter, without the dire consequences that humans would experience. The high glucose levels in their tissues allow them to survive buried in leaf litter even if the outside temperatures get down to 20ºF.

However, the operatic superstar of the vernal pool is the spring peeper. This tiny frog, only about an inch in length, makes a high-pitched trill, singing with a choral group that can be heard up to a mile away. A large air sac on this diminutive frog allows the males to amplify the sound they make and it is astonishing to hear the volume that results. They are exceptionally wary of predators and are quick to dive underwater, but if you are patient enough to stay and wait, you may be able to see them reemerge and spot the distinctive X on their backs. These little frogs can develop from eggs to tadpoles into mature frogs in just 7 weeks if conditions are right. The adults have large discs at the ends of their toes that enable them to climb small trees and bushes, usually in marshy and moist woodland areas. Like wood frogs, they are adapted to survive harsh winter temperatures buried in leaf litter.

Next to Lawrence School in Middletown, there is a site that “contains the greatest concentration of vernal (or seasonal) pools in the state. These unique pools and related woodlands provide breeding and foraging for a wide range of amphibians. Each pool contains a different universe of aquatic creatures,” according to Ellen Jokinen of the University of Connecticut. In addition to the muddy pools themselves, which are generally undisturbed, the surrounding woodlands provide the rotting logs, leaf litter and the insect life that the mature animals need. This unusual assemblage of distinct vernal pools certainly hosts wood frog, spring peeper, spotted salamander, and Eastern newt, and may have other less common species as well.

For additional information, go to Everyone Outside to see maps and locations for some vernal pools near Middletown.

By Elisabeth Holder, Chair of the Middletown Commission on Conservation and Agriculture

Photos, top to bottom: A perfect pool for a spring fling--dark and murky to swim through, delightfully mucky to smell (E. Holder); A red eft found on the forest floor of the Wilcox Conservation Area (E. Holder); A wood frog hanging out on the leaf litter in its woodland home (Askalotl CC0. INaturalist); A spring peeper seeks shelter between two boards, thinking it's on a tree (Sara Hollerich Giles CC0 INaturalist) 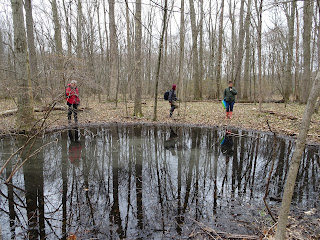 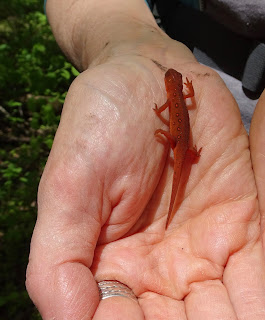 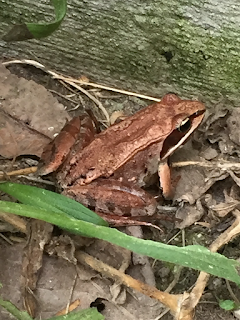 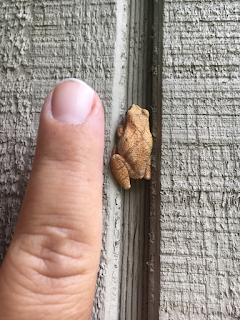 Posted by Jane Brawerman at 7:53 PM

This was a great article! In our second covid spring, we are spending so much more time outdoors and have learned a lot of new things (heard the peepers up in Hadley Mass on the Silvio O. Conte nature walk....we made the trek there because it is advertised as a "wheelchair-grade" hike - and it is!) Thanks for writing.