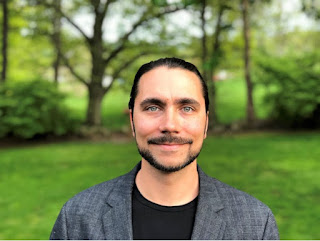 Submitted by Brandon Chafee.
-------------
Brandon Chafee received a unanimous endorsement from the Middletown Democratic Party Thursday evening to be their candidate for state representative in the 33rd District. Brandon was nominated by Mayor Ben Florsheim and seconded by Representative Joseph Serra who is not seeking re-election.

Mayor Florsheim said, “Brandon brings an incredibly unique background to this position, as an engineer, as a labor organizer, and as a lifelong resident. He is the type of person who will be looking forward and thinking forward. In all the time that I have known him, I have seen that he has a really strong moral compass and a really strong political backbone…I know that those qualities will serve him really well in the Legislature.”

Representative Joe Serra enthusiastically seconded the nomination stating, “It gives me great pleasure to second the nomination of Brandon Chafee, who I believe has the attributes, the dedication, and commitment to fulfill the obligations of the office of state representative and he has my wholehearted support.”

Brandon thanked them both for their service in his acceptance speech. “Mayor Florsheim has shown what real leadership looks like during this crisis. The level of information and support he has been providing to our community should be a model for all in elected office.” He continued, “Representative Serra, you have served our town and our party for decades, and we all owe you our gratitude for that.  Joe’s presence in the State House will be hard to replace, but I am confident that I possess the skills and background to serve our community well.”  Brandon also received endorsements from Lieutenant Governor Susan Bysiewicz and State Senator Matt Lesser at the virtual party convention.

Brandon said that he looks forward to using his experience as a civil engineer and his ability to solve problems to help our community. “The current crisis caused by the corona virus is highlighting many of the long standing, systemic problems in our economy and society. The need for affordable medication, the need to produce basic necessities domestically here at home, the need to expand voting rights, and the need for universal healthcare has never been greater than they are right now…Connecticut has a lot of structural problems, and I look forward to bringing new ideas and a proactive mindset to the Legislature to help solve them.”

Brandon is a Professional Engineer and a union steward with the International Brotherhood of Electrical Workers. He lives in the Westfield section of Middletown with his wife Meghan, dog Rocco, and cat Neville. Brandon promised that if elected, “I will be a strong voice for the working families of Middletown and will fight tirelessly to build a better future for us all.”

To learn more about Brandon, visit his Facebook page at Brandon Chafee for
Middletown and his website https://www.brandonchafee.com/